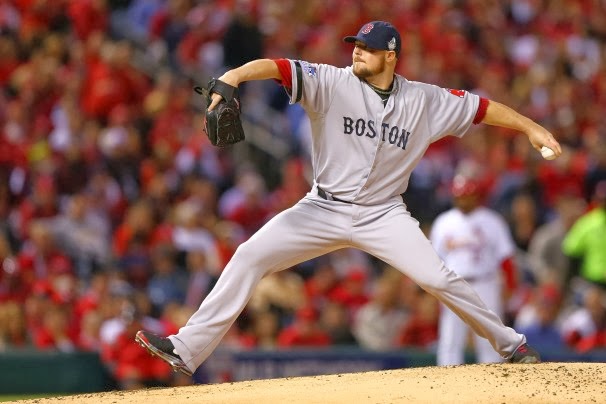 The Red Sox jumped out to an early 1-0 lead when Dustin Pedroia hit a 1-out double in the top of the first and came home when David Ortiz followed that up with a double of his own to put the Red Sox on the board. Wainwright then got Gomes and Nava to strike out to end the Boston threat.

Jon Lester got out to a strong start and was cruising until the bottom of the 4th when he gave up a solo homer to deep center off the bat of Matt Holliday to tie the contest up at 1-1. Carlos Beltran then hit a ball to deep left that looked like it was on its way out of the park before Johnny Gomes was able to run it down. Yadier Molina then grounded out to end the inning with the game knotted up at a run each.

The game would remain deadlocked at 1-1 until the top of the 7th inning when Xander Bogaerts hit a one out single followed by a walk to Drew from Wainwright. That brought David Ross into the batter's box and on a 1-2 count, this happened:

The Red Sox got the go-ahead run on Ross' ground rule double, and manager John Farrell had to decide whether or not to leave Lester in to bat or remove him for a pinch hitter. He stuck with Lester, although the decision didn't pay off immediately as he harmlessly grounded out without advancing the runners. That brought Jacoby Ellsbury to the plate and he singled up the middle, bringing Drew home to make it a 3-1 game. Ross attempted to add to the lead, but he was thrown out at the plate to end the top half of the 7th.

Meanwhile, Lester managed to cruise easily through the bottom half of the second, getting Holliday, Beltran and Molina to hit into outs. In the bottom half of the 8th, Lester got the first two outs before Farrell decided to bring Uehara in out of the bullpen for a 4-out save, getting pinch hitter Matt Adams to strike out and end the inning.

There would be no pickoff throw to end Game 5. Instead, Uehara would get Carpenter, Jay and Holliday out in order to win the game for Boston by a 3-1 final and take a 3-2 series lead over St Louis.

Just like Game 1, Lester goes 7⅔ innings- unlike Game 1 of the World Series, Lester actually gave up a run. Monday night's Game 5 would actually be the first time Lester gave up an earned run in a World Series start.

The series heads back to Fenway on Wednesday night for Game 6 with the Red Sox getting a chance to clinch the World Series at home for the first time since 1918. Although St Louis has a recent history of persevering in Game 6s and will send undefeated rookie hurler Michael Wacha to the mound in Game 6, the series shifts back to an American League park where Farrell can start both Napoli AND Big Papi instead of slotting in Ortiz at first and bringing on Napoli as a pinch hitter or late-inning defensive replacement. Aside from Lester, Farrell has a stable of fairly well-rested arms at his disposal should Game 6 get to an 'All Hands on Deck' type situation.

John Lackey gets the start against Wacha and the first pitch is scheduled for 8:07 PM ET. The game will be televised on FOX and carried on ESPN Radio.

MONDAY NIGHT FOOTBALL- Meanwhile, across town from the new Busch Stadium, the St Louis Rams were playing host to the Seattle Seahawks. In a game that many were expecting to be a one-sided blowout, the Rams defense was quite stingy and didn't give up that many first half yards and even took an early 3-0 lead.

However, Seattle was successfully able to keep the Rams out of the end zone and their more promising drives ended with field goals instead of TD's as Seattle goes on to win by a 14-9 final over St Louis.
Posted by Fenway_Nation at 4:04 PM