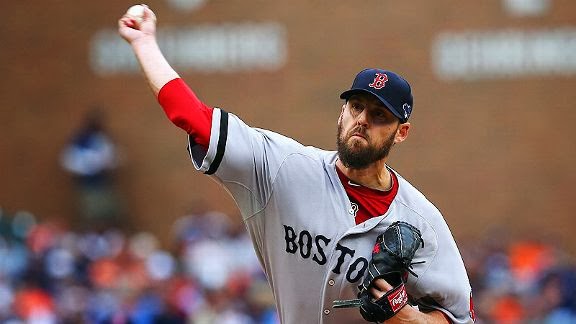 RED SOX- I'll be honest- if someone told me in the 7th inning of Sunday night's Game 2 of the ALCS that the Red Sox would have a 2-1 series lead, I'd ask them what the hell they were smoking and if they brought enough to share.

So here we are, 48 hours later. A large part of the urgency for the Red Sox in Game 2 was that not only would it have been bad enough heading to Detroit down 0-2, but they were also scheduled to face Tigers ace Justin Verlander, which would almost automatically guarantee the Red Sox falling into an ALCS 0-3 hole.

Fortunately for Red Sox Nation, Big Papi and Salty's late-inning heroics made the whole argument a moot point. On Tuesday afternoon, the ALCS resumed from Comerica Park in Detroit, MI with Verlander going up against John Lackey. To hardly anyone's surprise, Verlander was cruising early while Lackey was able to work around two singles he gave up in the bottom of the first to Torii Hunter without doing any damage.

Things took an odd turn in the middle of the second inning when the stadium lights went out. Even though it was a day game, the umpires decided to resume the game only after all the lights were back on given the gloomy and overcast conditions. Michigan utility DTE [NYSE- DTE] said the power outage was likely the result of a nearby cable failure. After a 17-minute delay, play at Comerica Park resumed.

But that wasn't the only power failure in Comerica on Tuesday. While it was almost a given that Verlander would keep the Red Sox bats quiet [true to the nature of the series, the Red Sox were held hitless until the 5th inning- NANESB!], Lackey would match Verlander's performance nearly pitch for pitch...with one key difference.

With one away in the top of the 7th and Napoli in the batter's box working the count full, the Red Sox broke the scoreless tie thanks to a solo homer to deep left center.

Meanwhile, Lackey would leave with one on and two away in the bottom of the 7th. Craig Breslow would come on and walk Alex Avila before getting Omar Infante to ground out and end the Detroit threat. The Sox bullpen would walk a tightrope in the bottom of the 8th- after Breslow got former teammate Jose Iglesias to strike out he walked Austin Jackson. Junichi Tazawa then came out of the pen and gave up a single to Torii Hunter with Jackson advancing all the way to third base. Tazawa would then get Miguel Cabrera to strike out before John Farrell would bring out Koji Uehara for the four out save. Uehara managed to shut down the Detroit threat by striking out Prince Fielder on three pitches.

When Uehara came back on in the 9th, he allowed a leadoff single from former Red Sox and Indian Victor Martinez, but Martinez would be erased from the basepath when Jhonny Peralta grounded into a double play. Avila would strike out to end the ballgame and give Boston a 2-1 series lead in the ALCS after Lackey, Breslow, Tazawa and Uehara made Napoli's solo homer stand up. Lackey would go 6⅔ shutout innings while striking out 8 batters and the bullpen would preserve the shutout for him.

A couple of interesting side notes- Tuesday's 1-0 win is the first 1-0 victory by the Red Sox in the postseason since Game 1 of the 1986 World Series against the Mets. Interestingly, Napoli's first career hit was with the Angels and was a home run off of Justin Verlander in 2006- also at Comerica Park.

Wednesday's Game 4 is scheduled for 8:07 PM ET from Comerica Park. The game will be televised on FOX and Jake Peavy and Doug Fister are slated to be the starters. 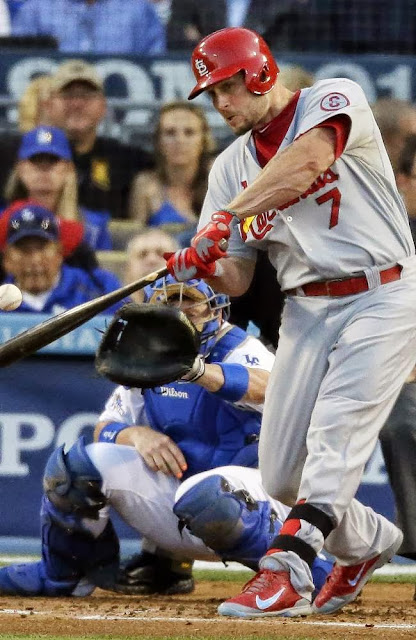 ELSEWHERE IN MLB- After winning the first two games of the NLCS at Busch Stadium by a 1-0 margin, the Cardinals were shut out by Hyun Jin Ryu in a 3-0 loss on Monday night's Game 3 at Dodger stadium.

Still, the St Louis Cardinals have moved to within one game of advancing to the World Series on Tuesday night after besting the Dodgers in Game 4 of the National League Championship Series at Dodgers Stadium.

St Louis took an early 3-0 lead in the top of the 3rd when Matt Carpenter hit a 1-out RBI double to put the Cards on the board before Matt Holliday hit a 2-out 2-run homer to make it a 3-0 ballgame. The Dodgers shaved the lead to one run in the bottom of the 4th after former Red Sox and Padres first baseman Adrian Gonzalez led off with a double and moved over to second when Andre Ethier walked. This set the stage for rookie phenom Yasiel Puig, who brought Gonzalez home with an RBI single. After Ethier moved up to 3rd on a Uribe fly ball, AJ Ellis drove in another run with an RBI single to make it 3-2.

However, the Cardinals would get some cushion in the top of the 7th when Shane Robinson belted a pinch hit solo homer to left field with one out to take a 4-2 lead. For the bottom of the 9th, Trevor Rosenthal came out of the Cards bullpen and gave up a leadoff single before Puig grounded into a double play and then got Juan Uribe to strike out to end the ballgame.

The Dodgers look to avoid elimination in Game 5 and will send Zach Greinke to the mound against Joe Kelly on Wednesday afternoon. First pitch is scheduled for 4:07 PM ET (1:07 Pacific) and the game will be televised on TBS.
Posted by Fenway_Nation at 10:36 PM