My my...the Red Sox, Bruins and Boston College all winning on the same day? Say- Did I mention already how much I LOVE this time of year? 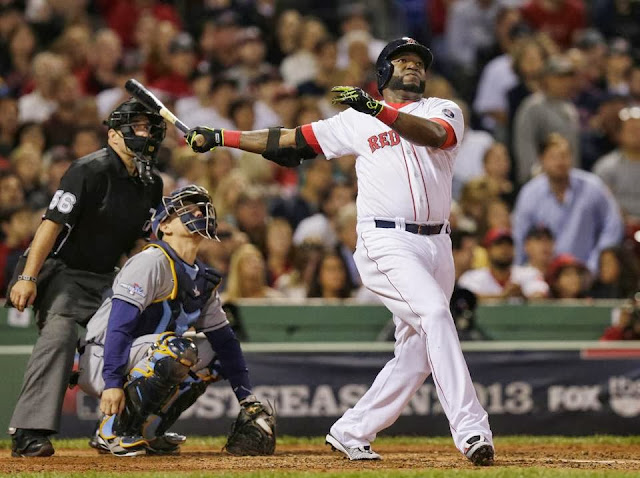 BOSTON RED SOX- In Friday's game one of the ALDS, the Red Sox went from being no-hit through the first three innings to scoring 12 unanswered runs to take the first game of the series by a 12-2 final and give Jon Lester his first postseason win 2008- also Game 1 of the ALDS.

Game 2 didn't get off the quite the promising start as Game 1, and Lackey was clearly struggling early on. The Red Sox gave him some run support early by getting an RBI sac-fly from Pedroia and solo homer from David Ortiz to make it a 2-0 Boston lead. Tampa Bay cut the lead in half in the top of the 2nd thanks to an RBI sacrifice fly from Delmon Young.


The Red Sox added to their lead in the bottom of the 3rd after David Ross led off the inning with a double before coming home thanks to an Ellsbury double. The speedy outfielder then advanced to third on a Victorino single. Pedoira then hit what looked like a sure double play ball to short, but Victorino took out Rays 2B Ben Zorbist with a clean slide- breaking up the double play and allowing Ellsbury to come home and make it 4-1. However, Rays starter David Price would get the double-play he was after when Big Papi came to the plate and did exactly that. The Red Sox added another run in the bottom of the 4th with a 2-out RBI triple from Stephen Drew.

In the top of the 5th, former Red Sox and Dodgers first baseman James Loney belted a 2-RBI double to deep center field to cut the Red Sox lead to 5-3. Pedroia would then get an RBI double to make it a 6-3 Boston lead. After watching Boston jump all over Tampa Bay for 12 unanswered runs, the crowd at Fenway was getting a little nervous when the Rays once again cut into Boston's lead with a Yuniel Escobar RBI single that chased Lackey from the mound.

David Price would stay in a bit longer but get yanked in the bottom of the 8th after giving up a solo homer to David Ortiz to make it 7-4 Boston. Price apparently objected to Papi standing at home plate and admiring the trajectory of his solo shot- this would actually be Big Papi's first multi-homer playoff game of his career.

The Red Sox bullpen (Bresolow, Tazawa and Uehara) held the Rays scoreless for 3⅔ innings, and although Lackey struggled for a bit, he stayed in the game long enough to get the win. Boston takes a 2-0 series lead in the ALDS as the series heads to Tampa Bay on Monday. Game 3's scheduled starters are Clay Buchholz [12-1; 1.74 ERA] will go up against Tampa Bay's Alex Cobb [11-3; 2.76 ERA]. First pitch is scheduled for 6:07 ET and the game will be televised on TBS.

ELSEWHERE IN MLB- Game 2 of the ALDS between Detroit and Oakland was an absolute pitching gem. Justin Verlander threw seven complete innings, allowing four hits and striking out eleven, but he didn't factor into the decision. Oakland starter Sonny Gray went eight complete innings, striking out nine. A's closer Grant Balfour got credit for the win after pitching a 1-2-3 top of the 9th before Oakland catcher Stephen Vogt drove in the winning run- the game's only run- with nobody out in the bottom of the 9th. This evens the series at 1-1 before the ALDS moves back to Detroit.

As a matter of fact, both series in the NLDS are knotted up at a game apiece. Game 3 of both the Dodgers-Braves series and Cardinals-Pirates series will get underway on Sunday from Los Angeles and Pittsburgh, respectively. 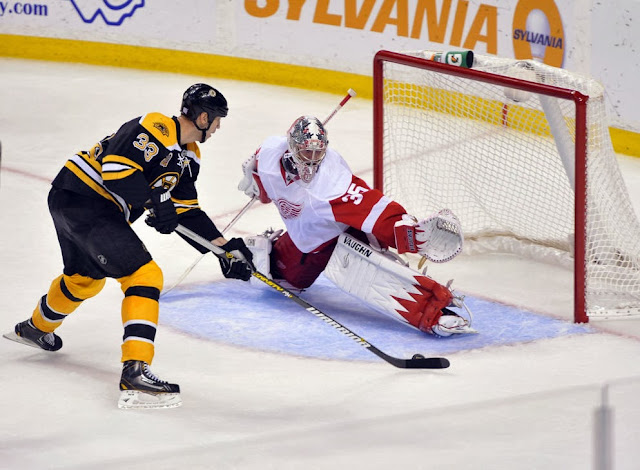 NHL- As the Red Sox and Rays were getting underway, the Bruins and Red Wings were going head to head for the second game of the season at TD Garden on Saturday.

Torey Krug got the Bruins on the board early with a power play goal about midway through the first period before the Red Wings tied things up at 1-1 thanks to a Henrik Zettiberg tally.

Boston would take a 2-1 lead not even forty seconds into the second thanks to a Brad Marchand goal. Jordan Caron would add to the Boston lead at the 7:58 mark of the second and the scoring in the 3rd consisted of a Zdeno Chara had a power play goalto give Boston a 4-1 win. Tukka Rask turned aside 36 of the 37 shots he faced and the Bruins were 2 for 4 on the power play in their first Original 6 matchup of the season.

The Bruins next game won't be until Thursday night when they host the Colorado Avalanche. Puck is scheduled to drop at 7:00 ET and the game will be televised on NESN.

NCAA FOOTBALL- It was the game the Obama Administration didn't want played.

The Boston College Eagles have managed to surpass their win total from last season in a game that the federal government had threatened to shut down earlier this week- and on homecoming, no less.

Eagles RB Andrew Williams stood out with a 263 yard, 5 TD afternoon, tying a school record in Saturday's 48-27 win over the Army Black Knights. Williams came into Saturday afternoon's game leading the ACC in rushing at 515 yards and will tack Saturday afternoon's impressive numbers onto this season's totals.

The Eagles will have their work cut out for the next week when they head down to the Palmetto State to take on #3 Clemson in a nationally televised game. Kickoff is scheduled for 3:30 ET and that game will be broadcast on ABC or ESPN 2, depending on where you're located.
Posted by Fenway_Nation at 11:56 PM