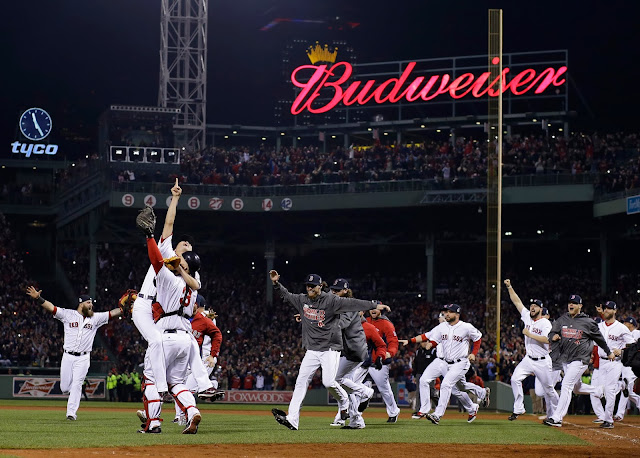 For the 3rd time in less than a decade, the Boston Red Sox are World Series Champions, taking the 2013 Fall Classic in 6 gams from the St Louis Cardinals.

Wednesday night's game was the first time the Red Sox have clinched the World Series at Fenway Park since 1918 and came a little over 6 months after the terrorist attack against the Boston Marathon that killed three and maimed hundreds of bystanders.

I'm at a loss for words right now- I can't help but shake the feeling that even if it's on just this brisk autumn night, all is right with the world.

I will post a more detailed re-cap of the game and some of the awards that were given out, but in the meantime I thought I'd end the 2013 MLB season the way I started it- with the late Ernie Harwell's soliloquy on this quirky, wonderful game that traces its roots to New England

Congratulations, to the Boston Red Sox- from worst [at least in the AL East- NANESB!] to first!
Posted by Fenway_Nation at 11:26 PM