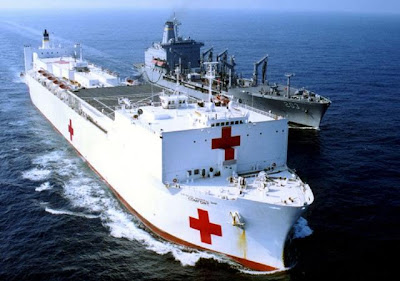 (File photo; US Navy)
The US Navy Mercy class Hospital ship USNS Comfort arrived near Port Au Prince last Wednesday and took on it's first patients. The first two were flown in by helicopter from the aircraft carrier USS Carl Vinson and included a 6 year old boy and a 20 year old man. The 894-foot vessel can accommodate 1000 hospital beds and has a compliment of over 900 medical personnel.

ELSEWHERE: Aftershocks as strong as 5.9 on the Richter scale jolted Port Au Prince on Wednesday, sending survivors out into the street fearing a repeat of the devastating quake that struck 8 days prior. Reuters is reporting that looting and sporadic violence has subsided with the arrival of American Marines and soldiers to provide security and oversee distribution of aid. Both the Haitian government and United Nations peacekeepers suffered casualties in the initial earthquake.

*French and Greek rescuers pulled out a man from the ruins of a collapsed grocery store in Port Au Prince some 11 days after the magnitude 7.0 earthquake levelled the Haitian capital. Rescuers discovered 24 year old Wismond Exantus under the rubble the same day the Haitian government ordered search and rescue teams to call off their search.

*Royal Caribbean Cruise Lines [NYSE: RCL] has come under fire for their decision to dock at a resort in northern Haiti shortly after the quake. The company defended the docking of Navigator of the Seas at Labadee, which was largely unaffected by the quake, saying that the company employs hundreds of Hatians and the devestated island nation's economy could use the infusion of capital that tourism provides. The company also said it was forwarding rice, fresh water and beans to the disaster stricken island nation. Two other vessels from the Royal Caribbean Lines, including the worlds largest ocean liner- Oasis of the Seas, are scheduled to dock in Labadee later on this month.

And finally, might I suggest tHugo Chavez help himself to a nice big, steaming cup of shut the fuck up? Particularly when Los Angeles County is sending more aid to Haiti then the oil-rich tropical paradise that he seems intent on pile-driving into the ground called Venezuela. This time, the Venezuelan dictator is claiming the devastation wrought in Haiti was a byproduct of a sooper-seekrit 'tectonic weapon' deployed by the US Navy and that it was used on the island nation of Haiti so we could help ourselves to the country's vast oil reserves? Wait....scratch that. It was clearly so the gringo yanqui imperialists could help themselves to Haiti's nearly limitless mineral wealth, with all those gold, platinum, copper and palladium mines- wait, that's not it either. I got it! It's all those skilled baseball players.....oh no- that's the other half of the island.
This kind of begs the question.....if the US military had such a weapon at their disposal, why not use it against Caracas, since....by using their logic, they already know too much and have all those precious energy and mineral deposits that a rapacious imperialistic war machine just can't get enough of. If such technology exists, I beseech the United States Military to deploy it only when Danny Glover and tHugo Chavez are meeting together.

And yes, I'm well aware of what Pat Robertson said shortly after the quake...and frankly, I thought the comments themselves were sanctimonious, self-righteous crap, but would also serve as a convenient and intellectually lazy way for people who disdain religon in general to harp on Christians as being intolerant and self-righteous. Patricularly disengenuous when you consider how many Christian charities and aid groups were active in Haiti before the earthquake. I mean...seriously- what kind of piece of crap would go out of their way to defend Danny Glover's statements?
Posted by Fenway_Nation at 8:02 PM