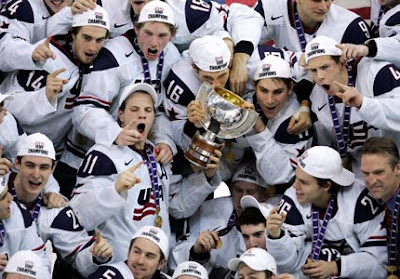 I have to say, I feel derelict in my duties as a sports fan to only notice that the IIHF World Under 20 Hockey Championship game was taking place only when the absolutely bored-sounding Ottawa Senators broadcasters gave the listeners the update from Saskatoon, SK to take their minds off the 4-1 thumping the Bruins were laying down on the home team Tuesday night. XM and the NHL Network were carrying the World Junior Championships live from Saskatchewan, so I figured that would be as good a time as any to tune in. Hell- I had only heard about Team USA's loss to Canada in the shootout New Year's eve second or thirdhand a few days after the fact.

Even though both the XM and NHL feed featured the slightly biased announcers from TSN, it was clear I made the right choice by tuning in towards the end of the first period when the match was tied at 2 goals a piece.

Team USA scored on a power-play goal by John Carlson (Hershey Bears of the AHL) just over a minute into the second period, but Canada came right back and scored the equalizer thanks to Taylor Hall (Windsor Spitfires of the OHL). That was enough for USA head coach Dean Blias to pull netminder Mike Lee (NCAA's St. Cloud St.) for Jack Campbell and the contest would head into the third period knotted at 3-3.

The third period was one for the ages and any meager attempt on my part to describe it on this little podunk blog would fail to do it justice, but I have to at least try. At the 4:12 mark of the third period, RPI Freshman LW Jerry D'Amigo made the twin behind Team Canada goalie Jake Allen (Montreal Jr. of the QMJHL). Team Canada coach Willie Desjardins pulled Allen in favor of Martin Jones (Calgary Hitmen of the WHL) in net for Canada. Just over two minutes later, Wisconsin sophomore Derek Stephan put one past Jones to put the USA up 5-3. However, the game was far from over and after nearly 10 minutes of pressure and swarming the net, Canada's Joran Eberle (Regina Pats of the WHL) broke through on a power-play goal to make it a one goal game and with a 1:25 remaining in regulation, Eberle scored again to tie the game on an even-strength goal and send the Championship game into overtime with what by rights should've been a back-breaker for Team USA.

However, at just over 4 and a half minutes into overtime USA's John Carlson shot beat Jones to the left side for the game winner and second goal of the game, deflating the crowd of 15,000 at Saskatoon's Credit Union Centre. Jack Campbell stopped 32 of 34 shots faced in 40 minutes of playing time and the USA won their second ever gold medal in the IIHF World U20 Championships. Congratulations guys, and good job overcoming what was no doubt that running-head-start-kick-to-the-nuts in the form of Eberle's game-tying goal. Hopefully this will whet the appetite of the 'grown-up' Team USA for the 2010 Winter Olympiad in Vancouver next month. 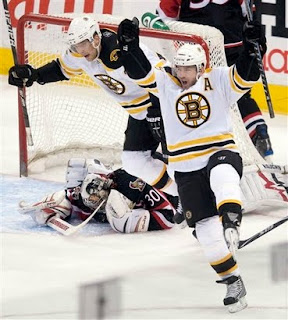 While my attention was focused on the goings-on in Saskatoon, the Bruins had a pretty good night in Ottawa after coming off their 3-2 loss to the NY Rangers. Blake Wheeler notched two goals and an assist while Tim Thomas stopped 27 of 28 shots on goal faced. David Krejci and Mark Recchi also had goals for the Bruins, who scored all of their goals in the first period for the 4-1 win over the Senators. 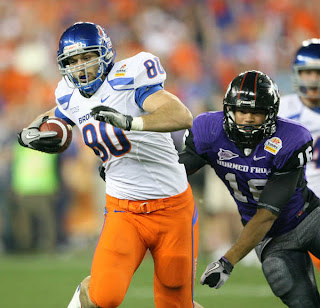 No hook and lateral or on-field marriage proposals this time around, but the results were the same as #6 Boise State's last appearance in Glendale, AZ. Although the game didn't feature nearly as many gadget plays as the 2007 Fiesta Bowl, I had to admire the chutzpah behind kicker Kyle Brotzman's 30-yard completion to TE Kyle Efaw on 4th and 9 during what would turn out to be the game-winning drive for the Broncos on Monday Night. Boise State beats #3 Texas Christian 17-10 and finishes with a 13-0 record on the year.

Ordinarily I'm not one of these 'let's all dogpile on the BSC system' people since I don't really have a dog in the fight, but this blogger thinks that pitting the undefeated Mountain West team against the undefeated WAC team was a huge cop-out on the part of the BCS when both teams earned the right to take on the SEC or Big 12 champions (or even the Gators). Now granted I think part of that stemmed from the fact that there were three undefeated teams from the rat-bastard conferences the BCS could never love (Cincinnati from the Big East as well as Boise St. and TCU), but I also think they were reluctant to have an SEC or Big 12 team embarrassed like what #7 Utah did to #4 Alabama in last year's Sugar Bowl.

Elsewhere, one of the less contrived matchups of the BCS pitted #9 Georgia Tech against #10 Iowa in the Orange Bowl. Now keep in mind Iowa started off the regular season barely squeaking past Div 1AA Northern Iowa by virtue of not one but two missed field goals at the end of regulation back in September, but went on a 9-0 tear until falling to Northwestern the first weekend in November. Despite outgaining the Yellowjackets 155 total yards to the Hawkeyes 403, the game was a fairly close 17-14 affair until Brandon Weghner's 32-yard TD run (which I tuned in from the IIHF final just in time to see) for Iowa late in the fourth, giving Iowa the 24-14 win.

Posted by Fenway_Nation at 9:22 PM