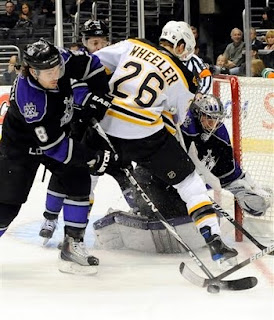 In a daytime matchup that pitted US Olympic goaltenders Tim Thomas and Jonathan Quick against each other, the LA Kings came from 2 goals down in the 3rd period to force overtime and then a shootout with the Bruins on Saturday. Although Boston got out to a 3-1 lead in the second period with goals from Blake Wheeler and Micheal Ryder- scored 11 seconds apart, the Kings came back to tie it on goals from Dustin Brown and Anze Kopitar- scored 2:22 apart. With no score in overtime, that brought up the shootout where Brown and Kopitar would score again while Quick stopped shots from Krejci and Satan to give LA the 4-3 win in the shootout.
The Bruins went 1-1-1 on their west coast road trip and will face the Ottawa Senators tomorrow in a matinee at the Garden.
The NFL's Conference championships are all set after this weekend. Less than a week after embarrassing the Patriots at Gilette Stadium, the Ravens season came to an end with a 20-3 loss against the Colts on Saturday night. The only upset and close game of the weekend was the finale down in San Diego, where the underdog New York Jets took advantage of some turnovers late in the game to stun the Chargers by coming away with the 17-14 win.
In the NFC, the Saints handled the Cardinals pretty easily for a 45-14 win. The loss for Arizona has fueled speculation on whether or not this was QB Kurt Warner's final season.
Under yet another dome, the Vikings dispatched the Dallas Cowboys 34-3 on Sunday. I don't think Jessica Simpson was in the building for this one, so Cowboys fans will have to blame this playoff loss on something else.....maybe....I dunno- Tony Romo?
Posted by Fenway_Nation at 11:58 PM