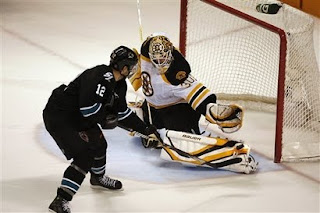 Tim Thomas looked every bit the Vezina winner he was a year ago in a physical, low-scoring game that was worth staying up for Thursday night. Even by West Coast standards, the game got off to a pretty late start- 7:30 Pacific Time- but pitted Joe Thornton against his former team. [Hmm...notice how nobody ever markets a San Jose-Boston matchup as 'pitting Marco Sturm against his old team'- NANESB!] so there might've been some appeal for the non-Bruins/non-Sharks fans to tune in as well. The game came the night after the Bruins lost 4-3 at Anaheim.
Danny Paille finally got the biscut past San Jose netminder Evgeni Nabakov 2:50 into the second. Joe Thronton would come back with one of his own just before the 10 minute mark in the same period. With the score tied 1-1, that would turn out to be the last goal Tim Thomas allowed that night. As physical as the game was, there were no penalties called until the 3rd period and both the third period and overtime were scoreless, which led to the shootout. The first three shooters for the Bruins (Ryder, Satan, Recchi) would miss, but Zdeno Chara- winner of the 2008 All-Star Game's Hardest Shot competiton with a 103.1 MPH slapshot- got the only goal for Boston in the shootout. Thomas would make the save on Patrick Marleau's shot on a must-score situation for San Jose, giving the Bruins the 2-1 win courtesey of the shootout.
Thursday night marked the third straight game that the Bruins played without Patrice Bergeron and Marc Savard. Boston's record is currently 23-16-7, good for second place in the Northeast division. The Los Angeles Kings (28-18-3) will host Boston at the Staples Center tomorrow afternoon.

Still without Kevin Garnett or Rasheed Wallace, the Celtics skid continued (I'm not sure that win against the 3-34 Nets technically counts as a 'victory') with a loss against the Chicago Bulls Thrusday night. Once the second half began, Boston never got any closer than within 4 points of the Bulls. Throught the whole night, the Celtics were never able to do any better than 54% from the free-throw line. Chicago almost sleep-walks away with this one, 96-83. The C's next game is at home against Dallas on Monday night- the game will be broadcast on TNT.

Elsewhere: Apparently football season isn't over, as there's still two weekends worth of playoff football as well as the Superbowl. Despite the lack of any teams whose name begins with 'New' and ends with 'England' in this weekend's matchups, the NFL has taken the rather risky and unorthodox move of continuing the postseason without them. This weekends games are as follows:
Saturday, January 17:
Arizona @ New Orleans- 4:30 PM ET
Baltimore @ Indianapolis- 8:15 PM ET
Sunday, January 18:
Dallas @ Minnestoa- 1:00 PM ET
NY Jets @ San Diego- 4:30 PM ET

The nuances of the Supreme Court's ruling in District of Columbia vs Heller were apparently lost on Gilbert Arenas. Although the Supreme court ruled that Washington DC's prohibition of handguns was unconstitutional, that did not mean 'Agent 0' could bring his collection to the Verizon Center's locker room and brandish them whenever a gambling dispute arose. Arenas pled guilty to carrying a pistol without a liscence in a Washington DC court Friday and could face a 6-month jail sentence. Arenas is already on an indefinite suspension from the NBA and will be sentenced in late March.
Posted by Fenway_Nation at 10:33 PM