Massachusetts state senator Scott Brown won a special election for a Senate seat formerly held by the late Ted Kennedy for nearly 50 years.
The race has taken on national significance because Brown campaigned on being the pivotal 41st vote against President Obama's healthcare proposal [You know, the one that was rammed through on Christmas eve when even the most die-hard politico following this probably had other things to do? -NANESB!] which would effectively kill it barring the reconciliation process. He also campaigned against other Obama policies such as Cap & Trade or Card Check in a state that Obama won handily a little over a year ago and still has a relatively high approval rating.
It should probably go without saying that this blogger is very happy (and a little surprised) with the outcome of the election. According to Brown's own campaign website, he's also pro 2nd-Amendment, anti same-sex marriage and a few other things that would be considered an anathema in deep deep blue Massachusetts (spelled with one E, Martha). Whether he votes that way or even has the opportunity to vote on such issues remains to be seen.
Make no mistake about it, President Obama invested alot of his political capital in this race and got burned badly- no matter how the Press Secretary Gibbs or MSNBC tries to spin it. Not counting two fruitless trips to Copenhagen, this marks the second time in less than three months that he's campaigned for a candidate in a very dark blue state and that candidate lost decidedly. This could also spook enough 'blue dog' democrats that were on the fence about healthcare (or had their votes basically purchased, Like Ben Nelson: D-NE) into withdrawing their support for the so-called healthcare reform bill after seeing poll numbers drop and now a republican in what's been called 'Ted Kennedy's seat'. Simply put- the Democrats overplayed their hand in the Bay state. They assumed the population at large would vote for anybody with a (D) after their name....a plate of haggis, a Jack Russel terrier, that hobo that sleeps under the King St. overpass and mumbles to himself.....anybody. Or at least anybody besides Martha Coakley.
But to point out what a gaffelicous candidate Coakley was would mean one wouldn't be giving enough credit to Brown's campaign. The national GOP basically gave up on him as a lost cause as recently as New Year's Eve, but he continued on, meeting people outside the Winter Classic and appealing to the working class and blue collar New Englanders that were supposedly the backbone of the democrats in the Bay State. He even had Curt Schilling, Doug Flutie and Cliff Clavin stumping for him towards the end....addressing thousands of enthusiastic supporters at a time while Coakley was meeting with lobbyists in DC and big-name, big money politicians and sporadic Union or academic gatherings. Not only was it appealing grass-roots stuff on Brown's part, it also showed the disconnect between the Bay State democrat establishment and the working-class citizens on Coakley's part.
This is probably the first time I can say it about anything political, but I'm very proud of my home state tonight. I highly doubt that it's going to turn a Texas shade of red on the electoral map, but the voters finally saw that the Bay state democrat establishment was treating the state like it's own little fiefdom and decided enough was enough.
Well played, Massachusetts (one E, Martha...pay attention). Well played, Senator Brown (R-MA).
UPDATE- Scott Brown's daughter's are hot.
And single.
And over 18.
Just thought I'd mention that. 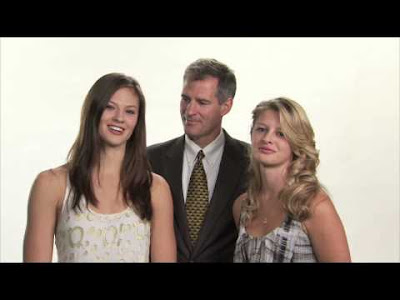 Posted by Fenway_Nation at 9:57 PM