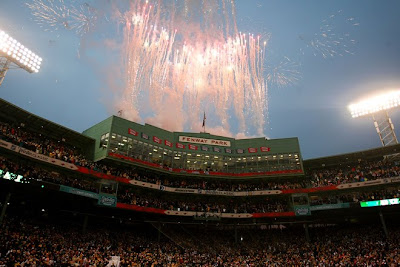 2010 started off on the right foot in Beantown with the Bruins hosting the Philadelphia Flyers at Fenway Park for the 2010 Bridgestone NHL Winter Classic. After opening ceremonies featuring Bobby Orr, Bobby Clarke, James Taylor, the Dropkick Murphys and a B-2 flyover, the first NHL game at America's oldest ballpark got underway on New Year's Day. 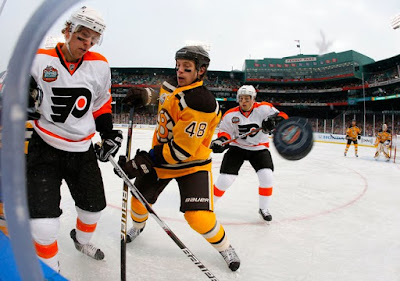 Perhaps the most noteworthy occurance in the scoreless first period was the scrap between Philly's Dan Caricllo and the B's Shawn Thornton, in which Thornton came in second best and both players were sent to the sin bin for 2 minutes.

Philly got on the board in the second period after Tim Thomas decided it was more important to take a retaliatory swipe at Scott Hartnell instead of paying attention to Danny Syvret, who had the puck and put it in the unattended net for his first career goal to put Philly up 1-0. Ah- but if the indoor games from earlier this season have shown us anything, it's that the Bruins have a tendencey to put themselves in an early hole that they usually manage to climb out of. 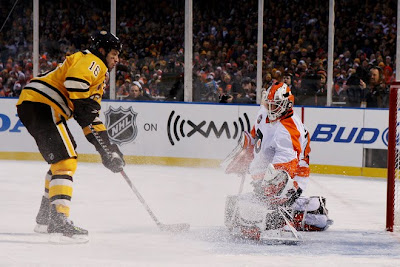 After being claimed off of waivers from the Carolina Hurricanes in mid-December and fresh off a 6-0 shutout of the NY Rangers, Flyers netminder Micheal Leighton carried his scoreless streak through the final two minutes of regulation. Flyers defender Kimmo Timonen got 2 minutes for tripping Zdeno Chara (not an easy feat, mind you) and with 2:18 left in regulation, former Flyer Mark Recchi put the Bruins on the board and tied the game up at 1-1 by deflecting a Derek Morris slapshot past Leighton. 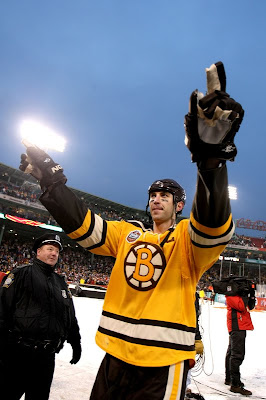 Flyers RW Danny Briere was called for tripping with 00:46 left in regulation, but the Bruins were unable to capitalize on the power play in regulation or when the penalty carried over into overtime. However, 1:57 into overtime was the moment most of the 38,000 in attendence had been waiting for when Marco Sturm managed to redirect Patrice Bergeron's feed past Leigton, giving the Bruins the walk-off win at Fenway. Tim Thomas stopped 24 of 25 shots faced, and while a number of spectacular dives by Thomas prevented rubber from meeting net, at times it seemed like the only thing keeping Philly off the board was their inability to corrall their own rebounds.

This marks the first time in the four outdoor NHL games that the home team has won. Immediately after the Winter Classic, it was also announced that winning goaltender Tim Thomas will head to Vancouver as a goalie for Team USA for the 2010 Winter Olympics.

Personally, I thought the event more than lived up to the hype- with the outcome of the actual game exceeding expectations. I suppose there are still some relatively minor gripes on my behalf about the selection of opponent (why not Montreal, Toronto, the NY Rangers or Washington Capitals? Any one of those seemed more sensible than the Flyers), but that complaint falls to the wayside after seeing how so many other aspects of the Winter Classic were just right. How appropriate that the Bruins are once again the talk of Boston after their win in the most classic of venues.
Posted by Fenway_Nation at 9:49 PM