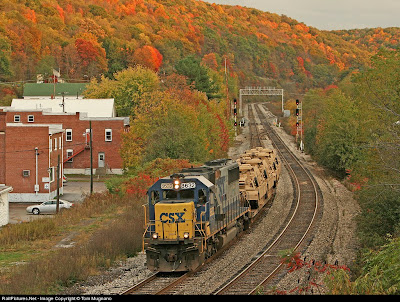 Ever since the Civil War, it's not unusual for military equipment to move by rail. Even in peacetime, the US Army will deploy domestically to places like Ft. Irwin (just outside of Barstow, CA) or Ft. Polk (in western Louisiana) for training, with tanks, armored fighting vehicles, trucks, hummers, trailers and generators being shipped by rail for the deployment [take it from somebody who's chained down many a Bradley or Abrams to a flatcar- NANESB!]. This smaller train, however, is a little unusual and I could only guess the equipment is en route to a smaller National Guard facility.
Posted by Fenway_Nation at 10:03 AM