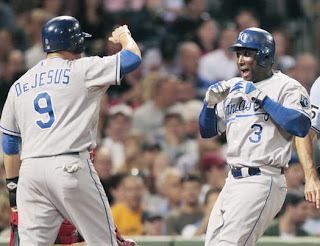 Well, after a week in which the Red Sox got convincing wins over the New York Yankees, Minnesota Twins, Philadelphia Phillies and managed to follow that up with a sweep of the first place Tampa Bay Rays....who could've foreseen the buzzsaw they'd run into that is the Kansas City Royals? And after Tim Wakefield's last start went so swimmingly (a phrase that I usually use dripping in sarcasm and bitter irony, but not in this instance) he gave up nine runs on 12 hits in 3 and 2/3rd innings in Friday night's 12-5 loss to the Royals at Fenway. Yuniesky Bettancourt's 4th inning grand slam capped the scoring for Kansas City in a 7-run 7-hit fourth inning that chased Wakefield off the mound that pur KC up for good. The beatdown comes one night after KC took the series opener at Fenway by a final of 4-3.

Maybe....just maybe the proverbial ship can be righted in tomorrow's game with a red-hot Clay Buchholz getting the start against KC's Zack Greinke. Having said that, the best the Sox can hope for at this point is a series split with the Royals.

Other Sox News: Well....might as well get the bad news out of the way- I mean the bad news besides losing 12-5 to the Royals.

Josh Beckett was placed on the 15 day DL with a lower back strain. Beckett left the May 19th game against the Yankees (the one where they played under protest) with back spasms.

But wait! It gets better worser. Fresh off the DL, Jacoby Ellsbury went back on it effective May 25th, reportedly with the same rib injury he sustained last month at Kansas City. The Red Sox recalled pitcher Scott Atchison from AAA Pawtucket to take Ellsbury's spot on the roster. There is no timetable for Ellsbury's return, as Francona and the team medical staff is taking a 'wait and see' approach.

There is some good news, however (and said without dripping sarcasm or irony). CF Mike Cameron has been back since May 25th. 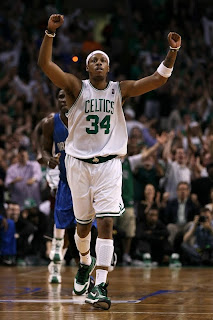 NBA: Ho-hum....another Eastern Conference win, another NBA final appearance for the C's. That's not to say the series win against Orlando wasn't without cost. Monday night, the C's rallied back to force overtime, but immediately fizzled, getting outscored 10-6 in the OT. Wednesday night's game was much more physical and the Magic walked away with the 113-92 win to erode the Celtics lead to 3 games to 2 and bringing to mind the Bruins Eastern Conference semifinal collapse earlier this month. Marquis Daniels and Glen Davis left Game 5 with concussions thanks to Dwight Howard's busy elbows and Rasheed Wallace was listed as questionable for Game 6 with back problems.
By the end of the first quarter of Game 6, the Celtics had a 19-30 lead over the defending Eastern Conference Champions, and basically never looked back. Paul Pierce was particularly busy with 31 points, 13 rebounds and 5 assists in the C's 96-84 win. Ray Allen had 20 points while it was a relatively quiet 14 point night to Rajon Rondo. Both Davis and Wallace also made an appearance in tonight's game, with Big Baby getting about 17 minutes of playing time and Wallace with just over 10 minutes.

The C's will await the winner of the Lakers/Suns series to find out who their NBA finals opponent will be.

NHL: Just a reminder that Game 1 of the Stanley Cup Playoffs between the Chicago Blackhawks and Philadelphia Flyer begins tomorrow night at 8PM Easter, 5 Pacific on NBC.
Posted by Fenway_Nation at 11:15 PM