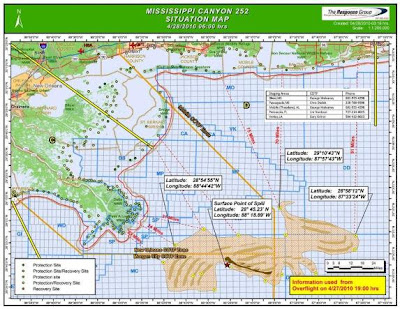 Oil from a massive spill in the Gulf of Mexico has already reached some outlying and marshes along the coast of Louisiana this weekend.
The spill began to spread after the April 20 explosion and fire on the Deepwater Horizon offshore platform that killed 11 workers before the rig collapsed and sunk below the surface. The Deepwater Horizon rig was located 50 miles offshore from Louisiana, and the wellhead was approximately 5000 feet below the water's surface. Completed in 2001 by South Korea's Hyundai Heavy Industries, owned by Transocean Limited [NYSE: RIG] and leased to British Petroleum [NYSE: BP], the Deepwater Horizon sank nearly 48 hours after the initial explosion. The cause of the April 20th explosion is unknown and still under investigation and BP is attempting to cap the leak at the source, although earlier efforts with a submersible have proven unsuccessful.
President Obama took time out of his busy schedule of browbeating Wall Street, complaining about his critics and celebrating himself to reassure the public that he would use every tool at his Administration's disposal to....do something or other....I dunno- to be honest, it's getting to the point where I just start drifting off and daydreaming that I'm being served Cuba Libres poolside by some voluptuous Christina Hendricks look-alike whenever I hear the president drone on speak. And not to dogpile on the man or anything, but isn't he like a week or so too late on this?
The spill was approaching some 80 miles in length last week and is expected to have a devastating long term effect on the Gulf Coast's economy over the next few years, stifling or killing off the tourism and fishing industries until the slick is cleaned up.
Posted by Fenway_Nation at 10:58 PM