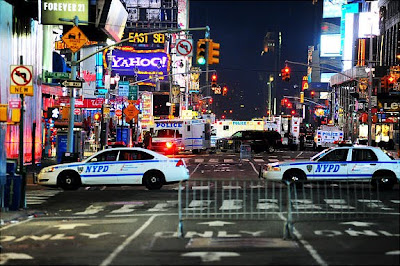 The NYPD was alerted by a T-shirt vendor in Times Square to an apparent car bomb that failed to detonate Saturday Night. A Nissan Pathfinder with Connecticut plates was parked with its hazard lights on and billowing smoke out of the back windows when vendor Lance Orton noticed it and notified a nearby mounted police officer. The patrolman could see inside the vehicle several propane canisters and 5 gallon gasoline cans.
After smelling gunpowder, Officer Wayne Rhatigan and two other NYPD officers began pushing hundreds of passers-by away from the area, urging them to stand clear. The explosive device- which investigators are calling 'crude'- failed to detonate. Firefighters and the bomb squad were called in to remove explosive items from the scene: investigators would remove fireworks, flares, batteries, a granular substance later identified as fertilizer, electrical wiring and an alarm clock. A heavy, black metal box resembling a gun locker was also removed from the vehicle.

The scare came at around 6:30PM Eastern Time, when theatergoers were having dinner before the nearby Broadway shows would've started. The block that was closed while the explosives were removed housed seven theaters.

The NYPD and FBI are examining surveillance videos from the area to see if they can pinpoint the Pathfinder's driver from the crowds of tourists, merchants and passers-by before the bombing attempt. The plates were traced to a Connecticut man who said he turned them over to a scrap yard.
Posted by Fenway_Nation at 10:40 PM