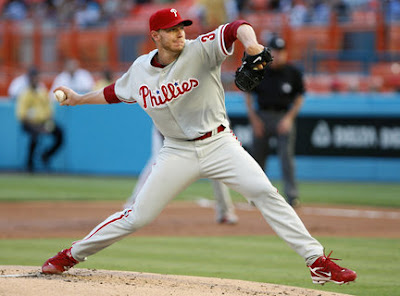 MLB: Nearly three weeks after Oakland's Dallas Braden threw a perfect game against the Tampa Bay Rays, Philadelphia's Roy Halliday matched that feat in a masterful performance against the Florida Marlins at Miami's Sun Life Stadium on Saturday. Halliday's 27-up, 27-down performance came less than a week after getting roughed up by the Red Sox at Citizen's Bank Ballpark in interleague play and one week after Daisuke Matsuzaka took a no-hitter into the 8th inning against the hosting Phillies.
What makes Halliday's perfect game all the more impressive is that he had considerably less run support than Braden did- the only run of the game coming on a fielding error by Marlins outfielder Cameron Maybin in the top of the 3rd that allowed Philly SS Wilson Valdez to score. Josh Johnson was the Florida starter who went seven innings, giving up seven hits, the unearned run and striking out six in the 1-0 loss for Florida [I'm obviously not a Phillies fan, but I do wish Harry Kalas was around to call the game- NANESB!].
The last time two perfect games were thrown in one season? June 1880, and less than a week apart. Lee Richmond of the Worcester Ruby Legs threw a perfect game for a 1-0 win against the Cleveland Blues on June 12th, 1880. The game took place at the Worcester Agricultural Fairgrounds and is is widely believed to be the first-ever perfect game in major league baseball history.
On June 17th John Montgomery Ward of the Providence Grays pitched a perfect game against the Buffalo Bisons at the Messer Street Grounds in Providence Rhode Island, winning 5-0. [See- give me any opening and I'll never miss an opportunity to go on about how awesome all the teams from New England are....even the ones that ceased to exist 125 years ago- NANESB!]

Red Sox: Kinda figures that after being on the wrong end of a 12-5 beatdown, the Red Sox would bounce back in a pitcher's duel on Saturday. On Saturday night, Clay Buchholz outpitched 2009 Cy Young winner Zack Greinke in 7 innings of work. The only run in the 1-0 game came in the bottom of the second on a Mike Lowell groundout that plated Adrian Beltre. Lester gave up four hits and struck out four in his 7 innings of work while Bard came on for a scoreless 8th and Papelbon closed out the game with a 1-2-3 9th inning. 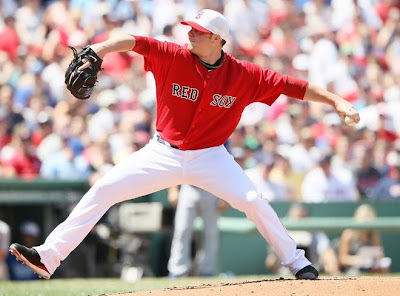 Sunday was a different story, with the Sox generating alot more offense in support of Jon Lester. In the top of the 2nd, Lester would give up an RBI groundout to Brayan Peña for Kansas City's only run of the day. In 7 innings of work, Lester would give up 4 hits, the one earned run, four walks and strike out five batters. Manny DelCarmen and Joe Nelson would close out the pitching for Boston.

The Red Sox bats were very much alive for this one, with Papi driving in a run on a sac-fly in the 3rd followed by a 2 run homer in the 5th. Mike Cameron is back, and on Sunday, he had a 2 RBI double before crossing the plate on a Marco Scutaro single (Scutaro also had an RBI groundout in the 5th). 'Tek rounded out the longball action with a solo homer of his own in the 8th in the Red Sox 8-1 win.

Next, the Red Sox will take on the Oakland A's on Tuesday at Fenway. John Lackey (5-3) is slated to start against Gio Gonzalez (5-3).

NBA: It's official- the Celtics will be going up against the Lakers in a rematch of the 2008 NBA Finals. The LA Lakers brought down Los Suns by a score of 111-103 Saturday night in Phoenix to win the Western Conference Finals 4 games to 2. Game 1 is slated to take place Thursday night, giving the C's some time to recoup after a couple of physical games against Orlando.

NHL: For those of you wanting an all-original 6 Stanley Cup final, too damn bad. While the Blackhawks held up their end of the deal, Montreal was bounced from the Eastern Conference finals by the Philadelphia Flyers on Monday night after a 4-2 loss, giving Philly the 4-1 series win. So instead, it's an Original 6 versus Class of '67 Stanley Cup final. After sweeping the San Jose Sharks, the Hawks took the 1-0 series lead in the Final in a defensively challenged Game 1 Saturday night by a score of 6-5.

Game 2 is set for Monday night at 8 PM eastern.

INDY CAR: I'm not really all that interested in motorsports, but Mike Conway's crash at the Indy 500 earlier has to be seen to be believed.


Oh....what the hell....here's a completely gratuitous Danica Patrick swimsuit photo while I'm at it: 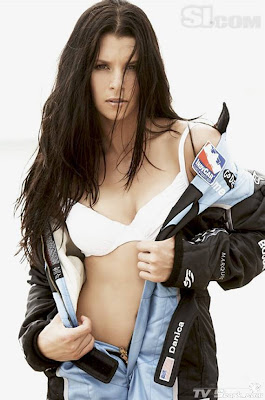 But getting back to the crash, Conway survived the spectacular crash and was airlifted to the hospital with a broken leg. Dario Franchitti was the winner of the 94th Indianapolis 500 and Danica Patrick finished in 6th place (after finishing 23rd on Pole Day). The Indy 500 win is Franchitti's second of his Indycar career.
Posted by Fenway_Nation at 11:57 PM