NHL: Wow....no real way to sugar-coat the Bruins exit. While not quite as embarrassing as being either the President's Trophy winner or Defending Stanley Cup Champion and getting bounced out by the #8 seed, coughing up a 3-0 lead in the Eastern Conference semifinals is still pretty damn embarrassing. Especially when getting off to a 3-0 lead in Game 7, only to have that evaporate in the 2nd period.

Some of you might remember Leighton from the Winter Classic on New Year's Day. After falling behind 3-0 in Game 7, the Flyers Micheal Leighton wouldn't allow another goal while Danny Briere would get the equalizer in the 2nd and Simone Gagne would notch a power-play goal in the 4th on a too many men on the ice penalty that was served by Shawn Thronton. The go-ahead goal put Philly up for good, making them the first NHL team that overcame an 0-3 playoff deficit since the 1975 Islanders mounted a similar comeback against Pittsburgh.

Well.....while it sure did suck for the Bruins choke the way they did, I think comparing it to the Red Sox in the 2004 ALCS is really valid, since when all was said and done, this was the #6 team being ousted by the #7 team (for the right to go on and play the #8 team). With that said, Bruins fans are gonna be in for a long summer of speculating over where Tim Thomas will wind up and who the #2 draft pick will be.

Oh....and just a reminder for those who don't normally follow hockey and think this is a fluke, Philly has gone on the thump the Montreal Canadiens 6-0 in Game 1 of the Eastern Conference Finals on Sunday. Congratulations to the Flyers for an epic comeback and apparently not losing any momentum whatsoever. 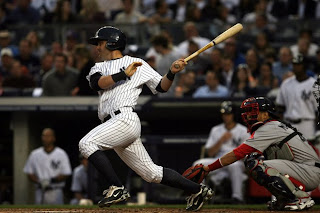 MLB: After dropping two out of three to the Detroit Tigers over the weekend, the Red Sox travelled to the Bronx to take on the Yankees with Matsuzaka on the mound against Phil Hughes. Despite falling into an early 5-0 hole, the Red Sox were able to chip away at the Yankees lead thanks in part to a Papi solo homer in the 4th and a JD Drew 3 Run homer in the 5th. Victor Martinez would go on to homer twice while Kevin Youkilis would homer to briefly put the Sox up 9-7. Daniel Bard had a pretty good bottom of the 8th, striking out Marcus Thames, getting Randy Winn to fly out before walking Juan Miranda and getting Jeter to swing and miss on a 3-2 count.

Papelbon's bottom of the 9th didn't go over nearly as well as Bard's 8th, giving up a 2-run homer to A-rod to tie the game before hitting Francisco Cervelli with a pitch and giving up the walk-off homer to Marcus Thames for the Yankees 11-9 win. Tomorrow night's game will be an opening night rematch with Beckett going against Sabathia. 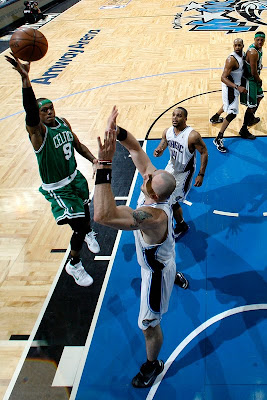 NBA: As depressing as it's been to watch the Sox and Bruins the last few days, there IS some good news. For starters, all the 'Where's LeGone LeBron gonna end up?' speculation can start a little earlier now that the C's took care of Cleveland with a 94-85 win over the Cavs Thursday night. No need for a Game 7 flameout like the Bruins, since the C's took care of it in 6.

The Eastern Conference final got off to a pretty good start for Boston, holding on to take game 1 92-88 on Sunday. Ray Allen had 25 points and 7 rebounds while Paul Pierce had 22 points and 9 rebounds and Rasheed Wallace came off the bench for 13 points late in the game. The Magic was held to shooting 41%- and only 22% from 3-point range.