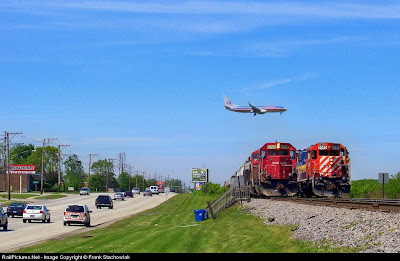 Today's rather multi-modal train of thought comes to us from the land of Obama Lincoln and gives us a pretty good cross section of the American railroads that Canadian Pacific acquired to bolster its presence in the US Mid-West. [Despite the title and Chicagoland nature of this photo, John Candy and Steve Martin are nowhere to be seen- NANESB!]
Railpictures.net contributor Frank Stachowiak caught this meet between two Canadian Pacific trains at Bensenville, IL on May 16, 2010. The train on the right is a unit ethanol train that originated on CP's newest acquisition- Dakota, Minnesota & Eastern. While the bloom is off that particular rose, ethanol has been something of a blessing for the railroad industry since it's almost impossible to transport ethanol via pipeline. This necessitates lengthy trains of inbound grain and outbound finished product.

Don't let red and white SD40-2 #6089 fool you- that actually is (or was) one approximately two dozen SD40-2s the DM&E purchased secondhand from CP Rail. Yet, before it could even be repainted in Cedar America Holding's distincitve blue and yellow scheme (you can see a hint of it on the unit trailing the 6089 or here) Canadian Pacific acquired the DM&E and sister railroad Iowa, Chicago & Eastern, making repainting a pointless exercise.

While waiting to proceed through Bensenville, another freight train is given clearance to proceed past the 6089 and idling ethanol train. This one consist led by Soo Line SD60 #6024, still in it's 'vintage' white and red scheme (like what's seen here). Many of the former Soo Line SD60s had been put into storage or sold to reigonals like the Indiana Railraod, but with an expected increase in traffic CP has begun pulling units out of storage.

As one of the crewmen on the #6089 inspects the passing train, an American Airlines 737 flies overhead on it's approach to O'Hare airport. The passing traffic on the adjacent highway pays this scene little mind, as this is pretty common on the lines into and out of Chicago.
Posted by Fenway_Nation at 10:53 PM