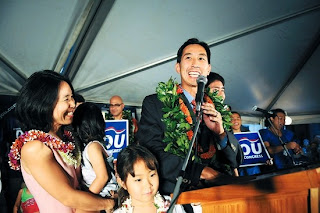 Honolulu City Councilman Charles Djou was declared the winner of a special election Mail-In vote in Hawaii's 1st Congressional District on Sunday. Djou resigned from his position on the City Council earlier today and is expected to be sworn in as early as tomorrow. The win comes less than a week after former Murtha aide Mark Critz defeated Republican Tim Burns in a special election in Pennsylvania's 12th Congressional District to fill the seat left vacant by Murtha's death.

The election was called for when Democrat Congressman Neil Abercrombie resigned to campaign for governor of Hawaii full time back in January. Initially the underdog, Djou managed to garner just under 40% of the vote on the ballot. Djou's campaign was helped by infighting between Democrats Ed Case and Colleen Hanabusa, with each demanding the other drop out of the race. Hanabusa got just over 30% of the vote while Case got roughly 27% of the vote, with the remainder of the votes going towards unaffiliated or independent candidates.

It's safe to say that Hawaii's first Congressional district is perhaps one of the bluest districts in the country, and although the vote was split between two democrats, it's still a little surprising that a democrat didn't win by a 40% margin instead of Djou. This district- which encompasses most of metropolitan Honolulu- has also occasionally been described as President Obama's 'backyard' [as opposed to Jakarta, Chicago or Nairobi- NANESB!].
Posted by Fenway_Nation at 11:17 PM