Well, almost immediately after Monday's soul-sucking Yankees walk-off win, things began to fall into place for the Red Sox despite an arduous schedule for the rest of the week and Josh Beckett leaving the final game of an abridged 2-game series in the toilet Bronx with back spasms Tuesday night.

On Tuesday night, the Red Sox went into the 8th inning trailing 5-1 before rallying to tie it 5-5. With Mariano Rivera in the game, Jeremy Hermida would go on to hit a 2 RBI double to give the Red Sox the 7-5 lead and while Papelbon gave up an RBI double to Robinson Cano in the bottom of the 9th, the Sox would hold on for the win and split the 2-game series at Yankee Stadium.
The brief two-game series against Minnesota at Fenway wouldn't be much easier. Clay Buccholz left with the lead after 8 innings, Big Papi had an RBI triple and Daniel Bard held off a late rally from the Twins for the 3-2 win on Wednesday.
On Thursday- a game I actually caught in real-time on XM- Lester went the distance against Minnesota, striking out 9 and giving up two rund on 6 hits while getting run support from Kevin Youkilis who went 2 for 4 with 4 RBI for a 6-2 win over the Twins.
One would think that some of that momentum would carry over to Friday for the start of Interleague play when the Sox travelled to Philidelphia to take on the reigning NL Champions. Now....while Friday night's suckfest left the Red Sox on the short end of a 5-1 game, the next two games more than made up for it.
Daisuke Matsuzaka isn't exactly known for his endurance, but he got some run support from a David Ortiz RBI double, an Adrian Beltre RBI double and a JD Drew RBI single and managed to take a no-hit bid into the bottom of the 8th before giving up a little flare single to Juan Castro to break up the no-hitter. Daniel Bard would come on to close out the bottom of the 9th for a 5-0 Red Sox win. That really is too bad- I was rooting for Dice-K and it would've been nice if 'Tek was the only major-league catcher behind the plate for five no-hitters (he came tantalizingly close when Schilling took a no-hitter into the 9th at Oakland 3 years ago). But given some of the hitters in that Philly lineup (Ryan Howard, Jason Werth, etc.), eight shutout innings would've been impressive, let alone eight no-hit innings. [Ganbatte, Daisuke!- NANESB!] 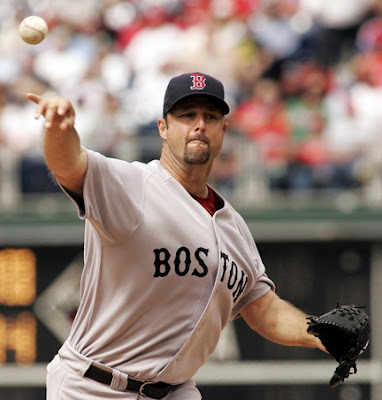 Not to be outdone, however, Tim Wakefield got the start for Boston against a familiar opponent (in a new uniform) in Roy Halliday on Sunday. The knuckleballer got some run support courtesey of Marco Scutaro, Kevin Youkilis and a fresh-from-rehab-assignment-in-Portland Jacoby Ellsbury, who had a 2 RBI infield single thanks to some aggressive baserunning by Scutaro in the top of the 6th inning. Halliday lasted 5 and two-thirds innings while giving up 7 runs on eight hits, while Wakefield threw 8 shutout innings, with Ramon Ramierez giving up 3 runs to close out the bottom of the 9th in Boston's 8-3 win over the Phillies.

Other Red Sox News: Saturday night's game also marked CF Jacoby Ellsbury's first start since April 12, when he left the game at Kansas City after colliding with 3B Adrian Beltre. Mike Cameron has been on the DL for almost as long as Ellsbury with kidney stones, but began rehabbing with AAA Pawtucket about two weeks ago. Cameron could be back as early tonight at Tampa. 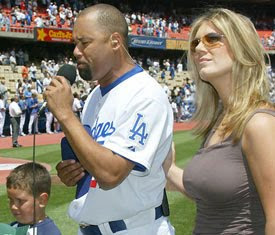 Other MLB News: Former MLB pitcher Jose Lima died from an apparent heart attack in the Dominican Republic on Sunday. The righty had a 13 season major league career playing for Houston, Detroit, the Mets, Kansas City and the LA Dodgers and was selected to the 1999 NL All-Star team. In 2004, he threw a five-hit shutout against the St. Louis Cardinals for the LA Dodgers in the National League Division Series, giving them their first playoff win since 1988. His outings were sometimes referred to as 'Lima Time' and some fans are remembering him for signing autographs and talking with fans during batting practice before games. Lima is shown here, singing the national anthem at Dodgers stadium with his son and gravity-defying ex-wife Melissa. 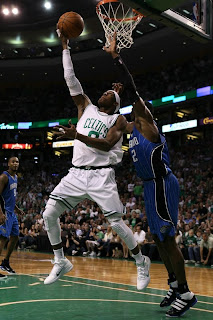 NBA: Holy crap. I was so captivated by Dice-K's no-hit bid on Saturday night that by the time I checked in on the Celtics on XM, they already had a 28 point lead over the Magic with about 10 minutes to go in the 4th. Seriously, Sunday night's 94-71 win over Orlando wasn't even that close. Paul Pierce helped open up a 16 point lead on Orlando in the 1st quarter, and apparently it was all downhill from there with Boston up 51-34 at the half. The thing is, nobody really dominated in terms of scoring for the C's- Ray Allen had 14 points, Rajon Rondo had 11 points, Paul Pierce with 15 and Glen 'Big Baby' Davis came off the bench for 17, along with going 7 for 9 in free throws.
The win gives Boston a 3-0 series lead (stop me if you heard that one recently) and the C's could advance to the NBA finals for the second time in 3 seasons with a win over Orlando in the Eastern finals tonight.
Posted by Fenway_Nation at 11:14 PM