This would actually be my first 9/11 observance of any kind since I started up this blog. There are those out there who are much better at this sort thing than I am, but I'll do my best nonetheless. Everybody seems to have their own story to tell about where they were that day. Mine is particularly anticlimactic- I literally slept through the whole thing since I had the day off and slept in and was functioning on West Coast time. On top of that, I decided to busy myself with some paperwork for awhile before I even bothered turning on a TV, radio or computer. On the radio, the 'Morning Zoo' FM DJs were solemnly trying to estimate how many people were in the World Trade Center Complex on any given workday. It was an odd line of discussion, but I didn't give it much thought until I heard one of them interject without the slightest trace of whimsy '...and the Pentagon is still burning'. By that time, I figured I better turn on the TV and see what the hell was going on. No matter what channel I was watching, they were showing the skyline of lower Manhattan minus the WTC towers- just a giant incomprehensible sprawl of smoke, dust and rubble. 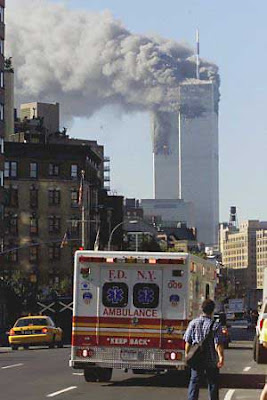 I was in a daze for awhile as I tried absorbing what had taken place while I was slumbering. Although I have relatives in Massachusetts and New York, I figured the odds of them being on one of the planes or in lower Manhattan were remote. Almost in a daze, I left for the grocery store and local pizza place, getting cans of soda and two extra large pizzas. From there, I went to the local chapter of the Red Cross, and sure enough, there was a line of people coiled around the block, volunteering to donate blood (this IS America, after all). Since I'm a total wuss who prefers to avoid needles, I simply started passing out slices of pizza and soda to the people waiting in line to give blood. 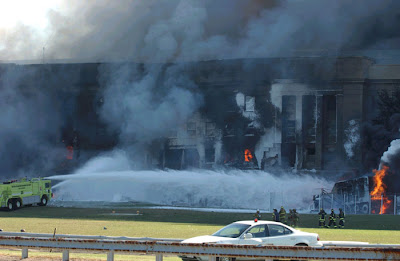 I wasn't sure what else I should do- although it would be reassuring to hear from some of my relatives (I have a few who are first responders in Upstate NY), I figured the courtesy call could wait, since they were reporting that almost 400 FDNY firefighters and NYPD officers were among those killed by the muslim terrorists that day. A death toll of hundreds- let alone thousands- was hard for me to comprehend (then again, so is rushing into a burning building of any size) and it looked as though some of my relatives would need to fill in for their besieged New York City counterparts. I was also getting word that there were people celebrating the attacks on the WTC towers and Pentagon. 'What kind of sick, vile, sociopathic fuckers would be celebrating this?' I asked myself. 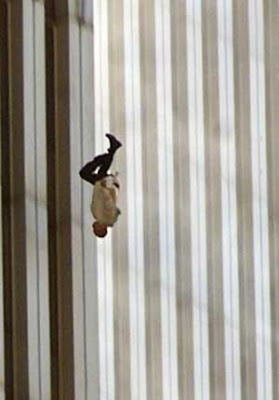 I soon got my answer. Juxtapose the image of a man who decided he was BETTER OFF jumping to his death with the video from below that day.

The shock and sorrow was replaced by a smoldering anger that seemed to gradually intensify when CNN introduced these patronizing 'Islam is a Religion of Peace' puff pieces in the following days along with the occasional reminder that Timothy McVeigh (may he rot in hell) was a terrorist too. As important as it is that we never forget those who were murdered that day, it's just as important to keep in mind who was dancing on their graves. 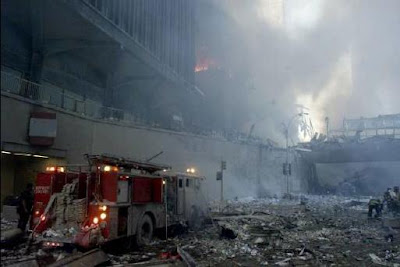 It's also important to avoid sugar-coating the events of September 11, 2001, such as many in the entertainment industry referring to it in neutral terms like 'tragedy' or 'disaster'. No doubt the end result is tragic, but the Towers didn't collapse in a stiff breeze. The Pentagon didn't get that chunk torn out of due to a ruptured water main. Flight 93 didn't crash in a field in Western Pennsylvania because a bird got sucked into the engine. These were calculated, meticulously planned acts of mass murder by muslim extremists- to gloss over that or say otherwise is a piss-poor attempt at re-writing history.

This is what so many mean when they say 'NEVER FORGET' 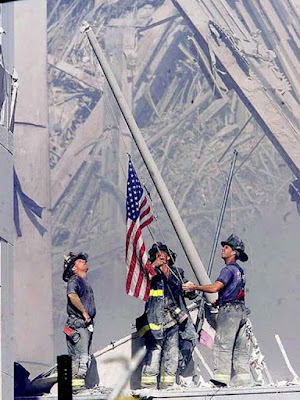 I would also like to take this opportunity to extend my appreciation and gratitude for the first responders in police and fire departments nationwide. Although I have rambled on for quite a bit, I don't think there are adequate words to describe the professionalism and selflessness it takes to endanger your own life and rush into a burning building or lead people to safety as exemplified by those in the FDNY and NYPD that September day.
Posted by Fenway_Nation at 1:06 AM