RUSSIA: Two female suicide bombers struck Moscow's subway during rush-hour Monday morning, killing at least 38 and wounding 60. The first bomber struck at the Lubyanka station at around 8 A.M. local time- the station is underneath the headquarters of the FSB, successors to the KGB. Approximately 45 minutes later, the second bomber struck at the Park Kultury station near the entrance to Gorky Park. Russian authorities believe that the attacks were orchestrated by terrorists with ties to Islamic leaders in the breakaway regions of the Caucasus. Chechen rebels have said earlier in videotaped statements that 'war is coming to the cities'. Moscow's subway system is the second busiest in the world, carrying an estimated 7 million passengers on any given workday. 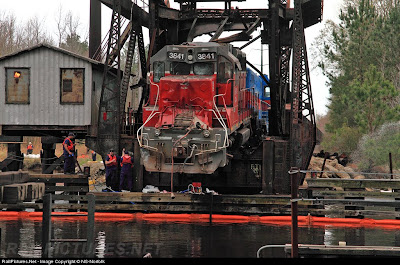 USA- NORFOLK, VA: RailAmerica shortline Chesapeake & Albermarle is expected to resume service tomorrow after an accident put one of the locomotives and one of the line's drawbridges out of commission on March 29th. According to railpictures.net contributor Chuck Rippel, here's what happened:

At approximately 4AM, the Chesapeake and Albermarle rock job was northbound with approximately 40 empties. When it approached the open Bascule Draw span over the Intercoastal Waterway, the train was not able to stop. Instead, the lead engine collided with the counterweight and other parts of the bridge. The train was able to stop just as the front trucks went over the edge of the bridge approach and it came to rest with 1/3 of the lead engine hanging over the canal, resting on its fuel tank.

The engine was removed 3/27/10. I don't know the status of the crew only that the news did not report any injuries. Approximately 1,800 gallons of diesel spilled into the waterway and the USCG can be seen on the lower left overseeing the fuel recovery. At this point, the Intercoastal Waterway has a mile of swamp on either side of this bridge. I walked down tracks from the north side and passed 2 sets of signals. The first, at 1 mile away is always "approach" and the second is stop. I'm going to surmise the same arrangement exists on the south side of the bridge. This bridge is unmanned and its my understanding the conductor follows the train in a van to open and close it. So far, I haven't heard any explanation as to the events behind this accident.

The Chesapeake & Albermarle operates about 70 miles of track in southern Virginia and Northeastern North Carolina, hauling stone and chemicals to the Norfolk Southern and CSX interchange in Norfolk, VA. 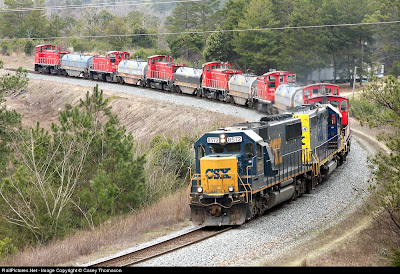 ST. LOUIS, MO: The Terminal Railroad Association of St. Louis (TRRA) has sold off the last of their fleet of SW1500 end-cab switchers to Progress Rail Services, replacing the venerable switchers with 10 GP38-3s. Here, Casey Thomason has caught CSX SD50 #8572 leading the ex-TRRA units in a dedicated move at Junction City, GA on March 22, 2010. The steel coil cars are placed between each TRRA unit because each of the SW1500s do not feature alignment control drawbars, making long-distance transit moves quite tricky. Five TRRA units derailed in transit last month at LaGrange, GA when CSX didn't bother using spacer cars between the transiting TRRA locomotives. 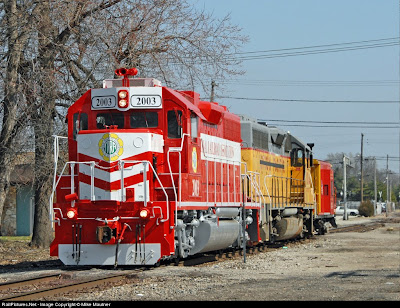 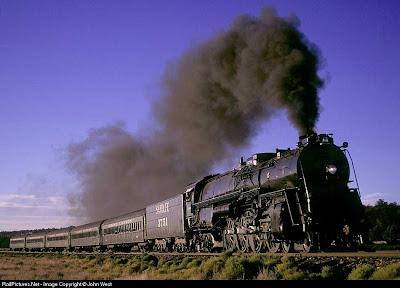 SAN DIEGO, CA: The San Bernardino Railroad Historical Society announced that their restored 1927-built Baldwin 4-8-4 Santa Fe #3751 would be making a round-trip between Los Angeles Union Station and San Diego on the former Atchison Topeka & Santa Fe Surf Line on the weekend of May 1st and 2nd, 2010. The 'Surf Line', running north out of San Diego, CA to Fullerton and Los Angeles, is presently used by Amtrak, BNSF, the San Diego Coaster, L.A.'s Metrolink and WATCO's Pacific Sun Railroad.

Although the SBRHS ran two LA-San Diego roundtrips with the #3751 in 2008, there were no such excursions last year due to financial concerns.
Posted by Fenway_Nation at 10:37 PM