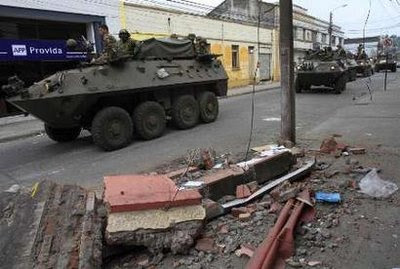 Authorities in Chile were revising their death toll from last weekend's 8.8 earthquake off the coast of Concepcion as the nation's military started pouring into the stricken areas to restore order and deliver food and emergency supplies.

On Thursday, Chile's Office of Emergency Management listed an estimated 200 attendees at a festival on the island of Orrego near the city of Constitucion as 'missing' instead of confirmed dead. Forensic experts are also arriving in an effort to positively identify some of the bodies pulled from the rubble.

UN Secretary General Ban Kai Moon pledged some US$10 Million from the UN's Central Emergency Response Fund for Concepcion and other quake-stricken municipalities as well as emergency supplies like water filters. The Secretary General appeared with outgoing president Michelle Bachelete on a live fundraising telethon this week and will tour the devastated city of Concepcion this weekend.

Earlier in the week, US Secretary of State Hillary Clinton had visited both president Bachelet and Chile's President-elect Pinera to assess Chile's immediate needs (generators, portable kitchens, portable kitchens). The initial supplies from the USA include at least 60 satellite phones, a mobile field hospital and emergency shelter materiels. 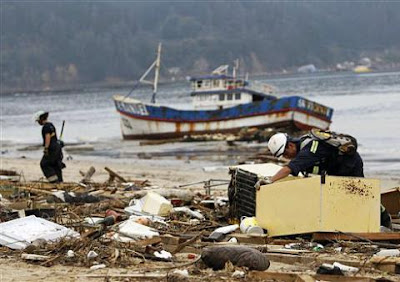 An aftershock registering magnitude 6.6 on the Richter scale rocked Concepcion early Friday morning, the strongest aftershock since a magnitude 6.9 temblor shortly after last week's quake. Buildings were evacuated and some patients in Concepcion's hospital were sent home as authorities feared the structure would collapse. Many residents in the region had taken to sleeping outside in the streets, concerned that a strong enough aftershock could collapse their homes.
Posted by Fenway_Nation at 2:03 PM