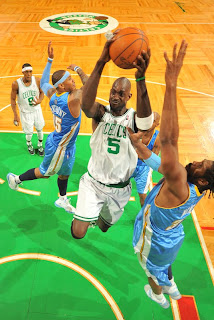 The Celtics are back in the playoffs after downing the Denver Nuggets 113-99 on Wednesday night at the Garden.

I only had time enough to catch a little bit of the 1st quarter last night, and thought the game would be a little closer based on how it started out. Kevin Garnett was pretty busy, racking up 20 points, while Paul Pierce had 27 and Rajon Rondo was good for a triple-double. Tony Allen came off the bench for 13 points and Brian Scalabrine had the night off.

Tonight's game was the fifth win for Boston in their last 6 games. This also marks the beginning of a 6-game homestand. The C's have a less than impressive 22-12 home record so far and will host the Sacramento Kings on Friday night. 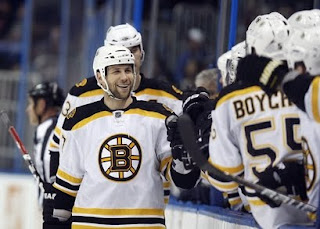 The Bruins are riding a modest 2-game winning streak after getting embarrassed (again) by Pittsburgh last Thursday at the Garden. After beating the NY Rangers 2-1 on Sunday, they travelled to Atlanta to take on the Thrashers Tuesday.

Needing a win to hang on to the 8th and final playoff spot, the Bruins got off to the early 1-0 lead in the first courtesey of David Krejci. Milan Lucic and Miro Satan would follow with tallies of their own in the second while Steve Begin would cap the scoring in the 3rd. Tukka "Two-K" Rask stopped all 33 shots he faced to blank the Ilya Kovalchuk-less Thrashers by a 4-0 final.

The win gives the Bruins 78 points on the season, good for 8th place as of Thursday morning. The Philadelphia Flyers remain a point ahead of them, while Boston managed to distance themselves from the next two closest teams behind them in the standings (Atlanta and the NY Rangers) by beating them head-to-head. Boston has won 3 of its last 4 games and will take on the Tampa Bay Lightning later on tonight.

The Bruins also announced that a 3-year contract extension worth a little over $6 million had been agreed to with defenseman Andrew Ference yesterday.

MLB: Daisuke Matsuzaka made his first appearance for the Red Sox this spring, releiving Tim Wakefield in Boston's 6-4 win over the Florida Marlins earlier today. Dice-K allowed one run on two hits with no walks and no strikeouts in two innings of work.

Yesterday, Josh Beckett was looking much better in his start against the Pittsburgh Pirates, striking out nine in five innings worth of work. Beckett allowed three hits, two walks and just one run in his day's work. The offense was looking sharp as well, with Victor Martinez, Mike Cameron and Bill Hall all going deep.

Dustin Pedroia was out of the lineup for Wednesday landing awkwardly on his wrist while trying to filed a liner by Minnesota's Denard Span earlier this week. The injury doesn't require much treatment besides keeping it on ice, and the second baseman expects to return to the lineup soon enough.
Posted by Fenway_Nation at 9:04 AM