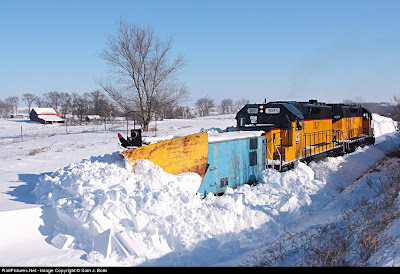 Did I already mention that snow removal in the Midwest during winter months is serious business for the railroads that operate there?

This is no less true for South Dakota-based aggregates-hauler D&I Railroad. Apparently, the 'D&I' stands for Dakota and Iowa, but is listed in almost every guide or reference as simply the 'D&I Railroad'. The D&I is a wholly owned subsidiary of L.G. Everist, Inc, a Sioux Falls, SD-based aggregates and materiel provider. Presently, the D&I operates 139 miles between Dell Rapids, SD and Sioux City, IA on a patchwork of their own former Milwaukee Road rails, BNSF trackage rights and tracks owned by the state of South Dakota with a small fleet of over 25 locomotives. At Sioux City, the D&I interchanges with BNSF, Canadian National and Union Pacific. Aside from hauling sand, cement, gravel and rock for it's parent company, the D&I has also been able to diversify its traffic in recent years, hauling grain, fertilizer and ethanol as well as storing freight cars on the lightly-used former Chicago & Northwestern Beresford branch (also owned by South Dakota DOT).

And it is on the Beresford Branch where railpictures.net contributor Sam J. Botts caught the D&I's former Milwaukee Road snowplow being used to clear the line at Alcester, SD with SD40-2 #3031 and SD39 #4027 shoving away on January 11, 2010. The line was being cleared to accommodate a cut of grain cars that were being brought up to Beresford to be loaded at the elevator there.
Posted by Fenway_Nation at 2:37 PM