NEW POLL UP: With baseball season right around the corner, I'm wondering if any visitors have a favorite baseball broadcaster. Most of the choices up there are veteran broadcasters that have been with the same team for the last 20 years or so, if not their entire careers. 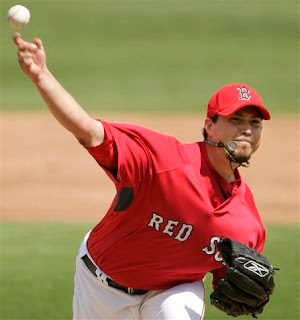 MLB: ESPN and The Boston Globe are reporting that the Red Sox have offered starter Josh Beckett a 4-year extension of his contract. Although the offer is for 1 year less than what Beckett's agent had asked, both sides are optimistic that a deal could be reached.
With the Grapefruit league winding down, Boston faced Tampa bay for the 2nd day in a row and immediately jumped all over Tampa's newest acquisition, former Braves closer Rafael Soriano. Soriano gave up four runs, three hits- including a 2-run shot off the bat of Anthony Rizzo- a walk along with 2 strikeouts in his one inning of work. Boston starter Casey Kelly allowed 2 runs on 4 hits in his three inning workday today. The Rays lineup was able to jump all over Daniel Bard, getting touched up for 4 runs on five hits and only recording two outs. The game ended in a somewhat anticlimactic 9-9 tie [maybe some sort of contrived sponsorship deal with 99 Restaurants- NANESB!]
Jonathan Papebon and Hideki Okajima are scheduled to appear in a minor-league game tomorrow. The Red Sox will play host to Baltimore tomorrow. 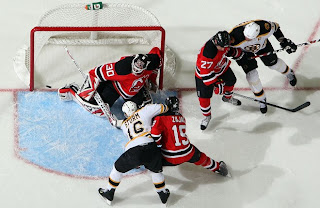 NHL: For the second time in 3 games, the Boston Bruins have managed to shut out an opponent. The B's traveled to Newark on Tuesday night to take on the Devils, with the young Finn in goal for Boston and future Hall of Famer Martin Brodeur in net for New Jersey.
And here is the scoring summary- Patrice Bergeron (assists from Mark Recchi and Mark Stuart) for the Bruins with 18.3 seconds left in overtime. That is all.....
Tukka 'Rask of God' stopped all 21 shots he faced on the evening (with an assist from the crossbar late in the 3rd), good for his 5th shutout of the season. Brodeur stopped 33 of 34 shots faced tonight for the Devils.
The win moved Boston into a virtual tie with Montreal and Philadelphia (although both teams hold the tie-breaker over Boston) and kept the Bruins 2 points up on Atlanta and 4 points up on the NY Rangers. New Jersey gets a point in the overtime loss and is only 1 point behind the Division-leading Penguins.
The Bruins will travel back to Boston to take on the Florida Panthers Thursday night and the Maple Leafs Saturday.
Posted by Fenway_Nation at 11:14 PM