The Envelope Ballot Please. Iraqis Head to Polls For Second Time in 5 Years 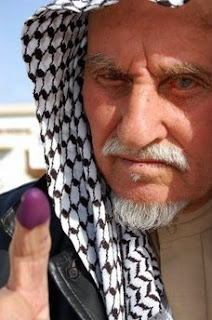 As the Academy Awards were wrapping up in Hollywood last weekend, halfway across the globe the Iraqi Parliamentary elections were getting under way. This would mark the second time in five years that Iraqis have headed to the polls in a national election.

While the security situation there has improved markedly since 2005, the campaigning leading up to the election was marked by threats and sporadic bomb attacks targeting campaign offices and public disputes and protests over a slew of candidates banned from this year's elections. Election day itself was relatively calm, although some mortar fire was reported in Baghdad. Estimates put voter turnout at 62% and with about 80% of the votes counted on Tuesday, former PM Iyad Allawi's al-Iraqiyya coalition has a narrow lead over the State of Law coalition headed by incumbent Prime Minister Mouri al-Maliki. Although there have been allegations of tampering and fraud by various factions, many independent international observers viewed last week's elections as largely open and fair [certainly no worse than your average Cook County, IL election- NANESB!].

Another aspect of last week's elections that received little notice was that the security for the polling stations was handled exclusively by Iraqi security forces. Not only that, but halfway through the day, Iraqi officials lifted a complete ban on vehicular traffic on streets and roads anywhere near polling stations due to concerns over suicide car bombers. The Americans sat this out for a number of reasons- and things worked out just fine.

Curiously, President Obama and VP Joe Biden have yet to take credit for this. I guess Joe was too busy getting his panties in a bunch over the Israelis building some apartments or something. In fact, I'm pretty sure Obama and Biden were all in favor of cutting and running from Iraq as senators. This does raise the question- if terrorist attacks against our soldiers or Iraqi civilians could be blamed solely on George W. Bush, the 'failed policies of the last 8 years' or some nefarious cabal run by Haliburtion or Blackwater from 2003 onward, how come these same actors do not get credit for free and open elections where there was once a belligerent, totalitarian regime grinding their citizenry slowly under their boot heels barely 7 years prior? Oh- and kindly spare me from this sanctimonious 'the-Iraqi-war-took-America's-focus-off-of-Afghanistan' bullshit; that's usually a favorite talking point of those who's military service and expertise goes no further than ordering the special edition DVDs of GI Joe. [No- I'm pretty sure the Taliban being able to reconstitute and re-arm themselves unobstructed in Pakistan's remote Frontier region had alot more to do with it, dumbfucks...thanks for playing- NANESB]

So while Hollywood was congratulating themselves in yet another awards ceremony last week, the people of Iraq had a say in attempting to establish a more stable and prosperous future for their fledgling democracy. Keep in mind the vast majority of those being honored in Hollywood last weekend would've been just fine if the Iraqis still had the boot of the Hussein regime still pressing down hard on their throats.

Now- nowhere did I say it was going to be smooth sailing regarding Iraq; however this could be seen as a good indicator. But given the history and nature of that particularly rough neighborhood, I think that is a far greater achievement than any computer-generated 8-foot tall blue person.
Posted by Fenway_Nation at 11:33 PM