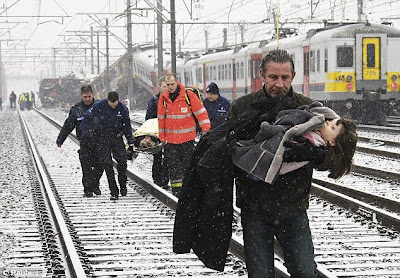 (Reuters)
BELGIUM- A rush-hour collision between two commuter trains on Febuary 15 in Brussels killed at least 25 passengers, according to Belgian officials. The two trains collided head-on after one of the trains, delayed by complications from the cold weather, went past a red signal. At least 50 other passengers were injured- in some cases their injuries so severe that their limbs had to be amputated at the scene. The derailment also resulted in the suspension of the Brussels-London high-speed Eurostar service until the scene could be cleared of the wrecked trainsets.
USA- The 1996 Edition of Kamblach's American Shortline Railway Guide describes the Northern Pennsylvania shortine Wellsboro & Corning as follows: 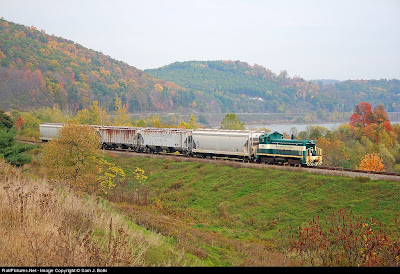 Seemingly little changed over the next decade. A single SW8 switcher (#800; former Conrail #8676, nee Lehigh Valley #262) was enough to bring the modest amount of freight from the interchange at Gang Mills to the Wellsboro area. Conrail gave way to the Norfolk Southern and the Tioga Central would continue operating excursion and charter trains over the scenic portion of the line between Wellboro Jct. and Lake Hammond

However, the diminutive Keystone State railroad also happened to be atop the Marcellus Shale natural gas deposit. The oil and natural gas industry brought in close to $7 billion for the state of Pennsylvania- and that was before the Marcellus bonanza.

When the Wellsboro & Corning changed ownership in 2008, the new owners had hoped to ship lumber out of northern Pennsylvania. WCOR owner A.T. Myles did not bank on the Marcellus shale or the natural gas industry's voracious demand for sand (to aid in a process known as hydraulic fracture drilling- applying high pressure to crack the shale). The lone SW8 departed the property for another Pennsylvania shortline and a locomotive was leased from the Norfolk Southern. With the high demand for 'frac sand', Myles decided to purchase four 3000 HP SD40-2s from the Quebec Northshore & Labrador Railway to aid in hauling 60-70 car trains loaded with sand. The railway doesn't haul sand directly to the natural gas wells, but it is instead transloaded from the hopper cars to waiting trucks.

And with the most recent statistics showing the unemployment rate in Tigoa County, PA topping 9%, Myles has had to hire 10 additional employees to help transfer the sand from the freight cars to the tractor trailers. A new trainshed to accommodate the SD40-2s has already been built. Myles also plans on reinvesting some of the funds into the maintaining the Tioga Central's depot and passenger cars as well.

BNSF-Passenger, freight and commuter service in San Diego, CA was halted when a Burlington Northern Santa Fe freight derailed just west of Marine Corps Air Station Mirimar on Monday Night. Three empty autoracks from the train that originated in Barstow, CA toppled over onto their sides on a hilly, remote portion of the line between San Diego and LA/Orange County that's used by Amtrak, BNSF, WATCO's Pacific Sun Railroad and San Diego's North County Tranit District (San Diego Coaster). Amtrak riders were bussed between San Diego and Oceanside, CA while Coaster commuters were bussed between the Sorrento Valley station and Old Town San Diego.
The tracks were expected to be repaired by the following afternoon.
Posted by Fenway_Nation at 7:53 PM