Denying that his decision had anything to do with spoiled brats his office kicked loose to kill again 24 years later politics, William Delhahunt (D-MA) announced last week that he won't seek re-election for Massachusetts' 10th Congressional district.

Delahunt was the Norfolk County DA when Amy Bishop fatally shot her brother with a shotgun at their Braintree, MA home in 1986. The shooting was ruled an accident and Bishop was released to her mother before she was even booked.

Professor Amy Bishop stands accused of murdering three of her colleagues and wounding three more when she opened fire on them during a faculty meeting at the University of Alabama Huntsville on February 12th, 2010.

Delahunt said his decision had nothing to do with politics and that he had been wrestling with the decision for some time.

A quick overlay of the 10th Congrssional district map and the electoral map of Massachusetts from the January Special Election shows that aside form Nantucket, Martha's Vineyard and Provincetown, most muncipalities in the district went to Scott Brown, which means that the district could concievably be in play for the GOP this November. 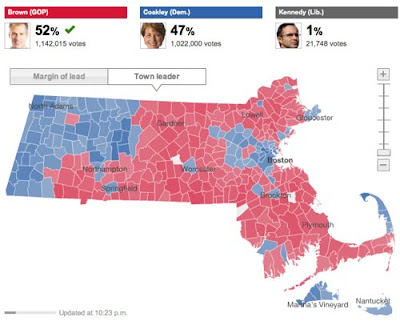 Posted by Fenway_Nation at 3:35 PM