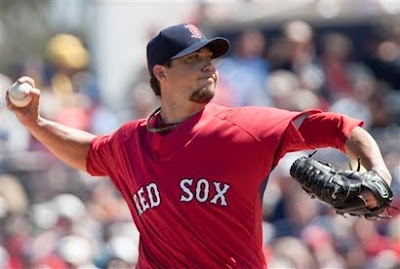 Well, in what feels like the blink of an eye to some we've gone from the closing ceremonies of the winter Olympics to the start of Spring Training. After taking on Boston College and Northeastern in exhibition games last week, Grapefruit League play got underway for Boston with a 2-1 win over Ft. Myers cohabitants Minnesota last Thursday.

On Monday afternoon, the Red Sox hosted the Pujols-less St. Louis Cardinals. Josh Beckett got 3 innings worth of work and made it look pretty easy, putting away all 9 batters he faced and striking out 3 of them. Papelbon, Okajima and Ramierez also followed up with one scoreless inning apiece.

Boston led 2-0 until the 7th, when a shaky Manny DelCarmen, allowing a hit, two walks and a run. With 2 on in the 8th, Dustin Richardson induced what looked like a routine groundout with two out that hit an umpire and brought two Cardinals baserunners home and left with an 'apparent injury' according to overthemonster.com. Down 3-2, Angel Sanchez and Che Hsuan Lin were walked and the iffy-hitting Jose Iglesias homered off of St Louis' Eduardo Sanchez and putting the Sox back up by a margin of 5-3. However, Randor Bierd struggled mightily in the top of 9th inning for the Sox after replacing Richardson, hitting a batter and giving up 4 hits without recording an out and letting the Cards retake the lead 6-5 before Scott Patterson came on to close out the inning. However, in the bottom of the 9th, Aaron Bates would reach on an error while Josh Reddick recorded a clutch, game-tying 2 out double, setting up Lin for some Grapefruit League heroics with a walk-off go-ahead single with two out.

The Cards' Chris Carpenter had two innings of work allowing 4 hits and an earned run. Evan MacLane was the losing pitcher for St. Louis. The Red Sox will take on the Marlins tomorrow. 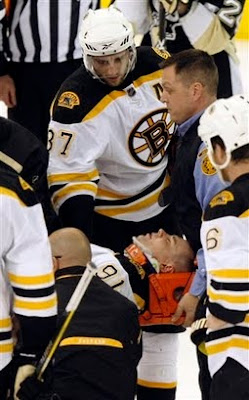 (AP)
The Bruins sought to continue their winning streak after the Olympic break, dropping their first game back to Montreal before going on to beat the Maple Leafs and Islanders. On Sunday, they took the early 1-0 lead against Pittsburgh at The Igloo on a Blake Wheeler power play goal before Pascal Dupuis scored the game-tying goal five minutes later by hacking away at a puck that looked for all the world like Tim Thomas had corralled and was waiting for the whistle to blow. Evgeny Malkin put the Pens up for good less than 2 minutes into the third to make it a 2-1 game, however, the story of the game would be Matt Cooke's late hit on an unwary Marc Savard 14:23 into the third period. Marc Savard was unconscious for a few moments and removed from the ice by a stretcher.

“It’s pretty obvious that was definitely a dirty hit,...[snip] That’s probably the classic blind-side hit to the head.”

Julien also thought that Cooke's blindside hit warranted a suspension while Cooke defended his actions by saying he was simply finishing his check.

Pittsburgh is 4-0 since the Olympic break while Boston is 2-2. The Bruins travel to Toronto for a Tuesday night game against the Maple Leafs- Savard said he hopes to be in uniform for Tuesday's game and is listed as day-to-day.

While I hadn't been paying that much attention to the NBA during the final week Olympics, it looked like the same held true for the Celtics. Seriously.....how could anybody lose to the Nets this year? But fear not! They seem to be offsetting that embarrassment with a 4-0 start to the month of March, taking down Detroit, Philly, Charlotte and most recently, Washington. Trailing by 13 with 6 minutes remaining, the C's managed to pull ahead with a 20-4 run- including 8 points from Ray Allen and another 6 from Rajon Rondo- for the 86-83 win over the Wizards at the Garden on Sunday. The win comes despite one of Kevin Garnett's worst performances in a Celtics uniform, going 0-7 in 30 minutes of play (although he was 8 of 10 from the free-throw line).
The Celtics will travel to Milwaukee Tuesday night to take on the Bucks.
Posted by Fenway_Nation at 11:17 PM