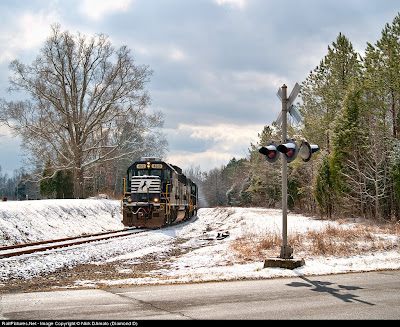 While drastic measures such as rotary plows or industrial-scale de-icers aren't required in the immediate aftermath, snowfall is still a relatively rare occurrence in the Carolinas. But on February 13, 2010 railpictures.net contributor Nick D'Amoto caught Norfolk Southern's Durham-Oxford, NC local freight P20 rounding a curve as it approached the hamlet of Providence, NC as the snow is starting to melt away in the bright sun. Local P20 will drop off and pick up cars from the various companies along the former Southern line before its crew takes the train back to Durham at the end of the day.