Even before 'pro-life' Democrat Bart Stupak caved into Nancy Pelosi and President Obama last week, Dan Benishek- a surgeon from Michigan's Upper Peninsula- announced his candidacy for Congress from the steps of the Dickinson County Courthouse last week. Benishek also has a Facebook page and new campaign website being developed. 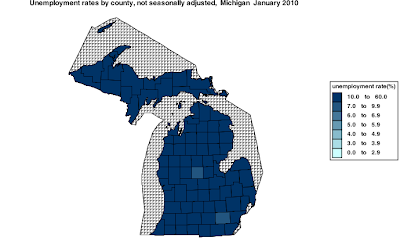 Even if every registered voter in Michigan's 1st Congressional District was as pro-abortion as Nancy Pelosi, there's still one very large issue that Benishek could bring up against Stupak in the election. The above map represents county-by-county unemployment statistics for Michigan., with dark blue (much of the state, really) representing counties where the unemployment rate remained above 10% as of January 2010. According to this excellent interactive graphic from the Washington Post, most of the counties in Michigan have an unemployment rate of 13% or higher.

According to the Bureau of Labor Statistics map and Washington Post graphic, the jobless rates in some Upper Peninsula counties are even worse than perpetually mismanaged and corrupt Detroit; with Mackinack County coming in at 31.2% and Baraga County reporting a 28.6% unemployment rate.

These seem like numbers reminiscent of some crooked banana republic. Remember when the President said that his priorities were going to be jobs and the economy during the State of the Union address? He did.....granted it was in there somewhere around Cap & Trade and repealing the military's 'Don't Ask Don't Tell' policy- almost like a requisite throwaway line. The fact that he went right back to his government-expanding, economy-killing pet project that more than half of America had their doubts about should speak volumes to even the most ardent supporter about Obama's priorities.

And when push came to shove, the much touted 'pro-life' bloc of the democrats- led by Stupak- sold out for an executive order that's hardly even worth the paper it was written on, saddling America with a 'Healthcare' bill that will provide more IRS agents than doctors or nurses. And for that, I think Bart Stupak should join the 31% of Mackinack county in the unemployment line.