The (Counter)Revolution Will Not Be Televised Tweeted: Twitter's Ascendancy in Venezuela Giving Hugo Chavez Fits 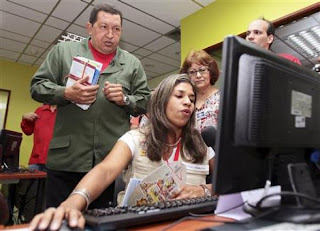 "The Internet cannot be free," he said, though days later he denied claims that his government planned to censor the Internet, pointing out that Web use by Venezuelans has expanded dramatically during his 11 years in power [emphasis mine- NANESB!]
Still, his detractors say a plan to channel all Internet traffic through the state telecom company is a strong signal of Chavez's intentions to silence online dissent.

Notice how Chavez avoids answering the question about censorship by saying that Internet usage has gone up while he was in power.....as though the two are mutually exclusive.

Frustrated by his ubiquitous presence in traditional media, where he often applies a law that forces TV and radio stations to broadcast his lengthy speeches, opponents see networking sites as a means of outwitting the populist president.

Which is all the more reason for Chavez to funnel all internet traffic through the state-run telecom. Chavez has belatedly set up his own Twitter account, but with the socialist dictator known to give speeches that go on for as long as 8 hours, I suspect he's going to find it extremely difficult to keep his 'Tweets' to a maximum of 140 charachters.
Posted by Fenway_Nation at 3:08 AM