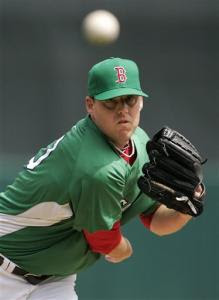 Apparently in addition to the traditional green jerseys, the Red Sox decided to celebrate St. Patrick's Day by going 0'for the week. Beckett got hit pretty hard today, giving up four runs on six hits in 3 and one-third innings and 70 pitches worth of work while Wakefield got knocked around in Monday's 8-4 loss to Baltimore. Beckett was reportedly bedridden for a few days with flu-like symptoms and missed his last scheduled start against Minnesota on Sunday.

There were signs of life in Boston's offense in the 9-7 loss to Pittsburgh at Bradenton, FL today. Big Papi hit a two-run homer off of Pirates starter Paul Maholm in the first inning. Beckett was taken out of the game after Delwyn Young belted a 2-run homer off of him while Garrett Jones and Steve Pearce also homered for Pittsburgh.

John Lackey's start on St. Patrick's Day was much more impressive, although the Red Sox would go on to lose that day as well. Lackey threw 39 pitches in four innings of work, striking out two and issuing zero walks against the NY Mets Wednesday. His combined total in 9 innings of Spring Training pitching is five hits, no walks and no runs. Nursing a 1-0 lead in the 8th, Mets outfielder Fernando Martinez belted a 3-run homer off of Ramon S Ramirez; Ramirez would give up 4 runs on 2 hits and 3 walks- all without recording an out. The Mets would go on to win 4-2.

ELSEWHERE: 19-year old Red Sox prospect Ryan Westmoreland underwent successful brain surgery at St Joseph's Hospital and Medical Center in Phoenix, AZ on Tuesday. He was moved from the hospital's intensive care unit to the neuro rehabilitation unit earlier today. Westmoreland was drafted by Boston in the 5th round of the 2008 MLB draft from Portsmouth, RI High School.

Doctors report that Red Sox SS/3B Gil Velazquez could miss up to 6 weeks with a fractured bone in his thumb. Velazquez reportedly injured himself in Tuesday's spilt squad game against Houston.

And more trouble concerning the Sox infield, as SS Jed Lowrie was diagnosed with mononucleosis earlier this week. Lowrie hadn't played since March 11th and was reportedly feeling fatigued.
Tomoyo Matsuzaka, nee Tomoyo Shibata, delivered a healthy six pound, 9.5 ounce baby girl on Thursday evening. Her husband, Daisuke Matsuzaka, flew up from Florida in time to witness the birth of his daughter before returning to Floriday earlier today. Matsukaza is expected to start a minor-league game on Sunday and threw 44 pitches in a bullpen session today. Dice-K is slated to pitch 2 innings in the minor-league game before making his 2010 Grapefruit League debut [Shuugi/Congratulations!- NANESB!]
Posted by Fenway_Nation at 11:00 PM