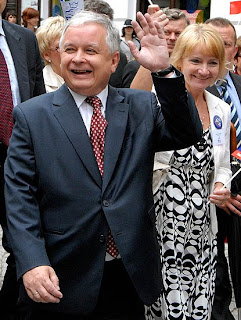 An aircraft carrying Polish President Lech Kaczynski, his wife and Polish dignitaries has crashed on approach to Russia's Smolensk airport Saturday. At least 87 passengers were reportedly killed in the crash, although there is no confirmation on the status of the President and First Lady yet.

Kaczynski and his wife, Maria, were on their way to a ceremony at a WWII Memorial in Smolensk. The UK's Daily Mail is reporting that the plane involved was a Tupolev TU-154.

According to reports, the plane crashed 1.5 kilometers from the runway at Smolensk in foggy conditions after the pilot accelerated to land before losing contact with air traffic control.

UPDATE: Sky News and other outlets are reporting that there are no survivors.
Posted by Fenway_Nation at 1:09 AM