Tuesday Cuppa Sports Chowdah- Buffalo Shuffles Off in 1st Round; Sox Nearly Blue It in Toronto; Heat Seeking Another Elusive Win Against C's

Wow- where does the time go? After a pretty lackluster weekend where the Bruins dropped Game 5 against Buffalo, the Sox drop a Sunday game to Baltimore and the Celtics lost to Miami in Game 4, this week is off to a pretty good start. 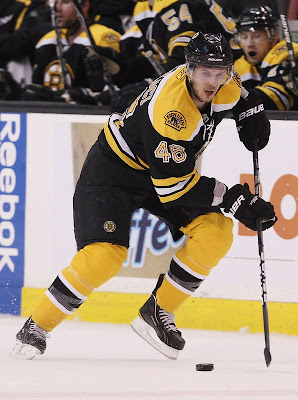 NHL: The Boston Bruins held on to beat the Buffalo Sabres 4-3 at the Garden Monday night, giving them the 4-2 series win. 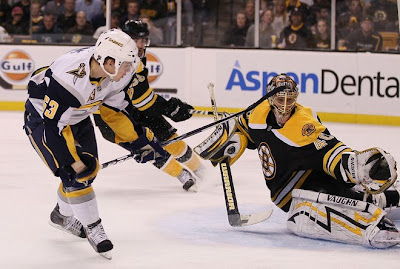 For the first time in the series, Boston scored first when David Kejci tipped a Mark Recchi shot in past Ryan Miller at the 13:39 mark in the 1st. Inceidentally, that marks Recchi's 75th career assisst in the playoffs. Recchi would make it a 2-0 game on a 4 on 3 power play early in the 2nd before the Sabres would get a marker from Patrick Kaleta with 13:26 remaining in the period.

Krejci would get his second goal of the night to give the Bruins a 2-goal lead just over the 7 minute mark of the 3rd period. Only 22 seconds later, Buffalo would make it a one goal game again when Michael Ryder turned over the puck to the Sabre's Nathan Gerbe, who shot it past Rask to make it a 3-2 game.

With just over 5 minutes left in regulation, Miroslav Satan would give the Bruins some much-needed insurance when Dennis Wideman shot a puck on net that would bounce off of Milan Lucic's stick before Satan would get it in past Ryan Miller to make it 4-2.

The 2-goal lead came in handy when the Sabres pulled Ryan Miller fo the extra attacker and Thomas Vanek scored with 73 seconds left in the game to make it 4-3. However, Boston would hang on for the series win.

Overall, Tukka Rask stopped 27 of 30 shots faced while Miller stopped 28 of 32 shots faced (I didn't hear the horn go off prematurely like the last game at the Garden, though).

Regrettably, the game was not televised nationally so I was unable to see it. I was able to follow it on XM, however.

Other Bruins News: Marc Savard has been cleared to play according to Bruins GM Peter Chiarelli. Speaking in a conference call earlier today, Chiarelli said that Savard got the thumbs-up to skate from Dr. Jeremy Schmahamann on Monday.

Jason Varitek went 3 for 5 and had 4 RBI's in Monday's game- as many as he had for the whole season. Meanwhile, Marco Scutaro scored a career-high 4 runs in a 13-12 slugfest at the Rogers Center. Josh Beckett only lasted 3 innings and saw his ERA shoot up to 7.22 while Scott Schoenweis was credited with the win and Jonathan Papelbon came on for a 1-2-3 bottom of the 9th and the save. The Red Sox win their first game of 2010 against Toronto 13-12, but as you can imagine, it wasn't pretty.

Tonight's game will have the Jay's Shaun Marcum starting against Clay Buccholz.

NBA: After taking a 3-0 series lead on the road in Miami Friday night, the Celtics lost their first road game of the playoffs Sunday to the Miami Heat, including a 46 point performance by Dwayne Wade for a 101-92 final. Game 5 starts tonight at the Garden.

NFL:After one day of Draft-a-palooza, the Pats selected Rutgers CB Devin McCourty in the is round. But apparently there was more to come after that.

On Monday, the Patriots announced that they cut Pro Bowl linebacker Adelius Thomas.
Posted by Fenway_Nation at 1:30 PM