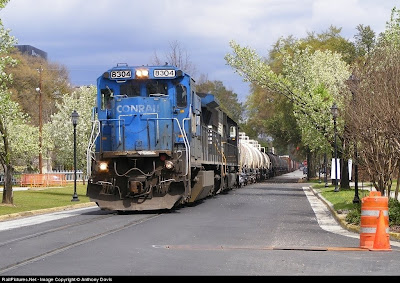 Spring has sprung and with the sporting world's attention focused on Augusta, GA for the Masters, railpictures.net contributor Anthony Davis highlights the downtown area of the city featuring parks, shops, trees in bloom and the Norfolk Southern mainline running down the middle of 6th street and across the Savannah River into South Carolina.

Here, Anthony Davis has caught Train 155 traversing the middle of 6th Street led by Norfolk Southern C40-8 #8304 still in Conrail paint and a standard cab SD60 with the trees still in blossom on March 26, 2010.

Norfolk Southern and CSX transportation divided up Conrail in 1999- although Conrail never ventured further South than Virginia, both railroads inherited Conrail's fleet of blue locomotives. More than a decade later, not every Conrail unit has been repainted.
Posted by Fenway_Nation at 2:41 PM