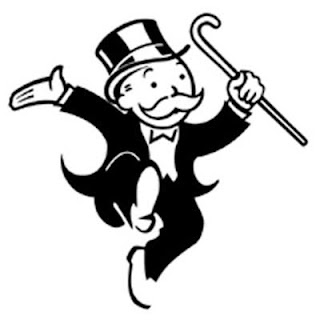 Less than 2 weeks after Henry Waxman (D-Nostril-ia) threatened to haul the CEOs of Verizon, Caterpillar, 3M, Valero and basically any company that said that 0bamacare would eat into their earnings and harm already existing company healthcare and pensions plans before Congress, Napoleon from Orwell's Animal Farm Waxman has apparently done an about-face.

In lieu of that, we're treated to a dog and pony show chock filled with phony and contrived outrage from Congress over Goldman-Sachs' [NYSE: GS] 'unbridled greed' during the sub-prime lending crisis back in 2008.

I'm not sure, but I think the desired reaction from the public is supposed to be 'GRRRRRR! Those greedy fat-cats at Goldman-Sachs make me so ANGRY! RAAAAAR!! FENWAY SMASH!!!' or something along those lines while overlooking how the Democrats in charge of this week's sad little sideshow as well as Obama himself had benefited mightily from campaign contributions from Wall Street firms like Goldman Sachs or JP Morgan [which I'm sure they'll be giving back immediately- NANESB].

Even if I made the idiotic assumption that Congress was sincerely calling upon lenders and financial institutions like Goldman Sachs to further explain their activities during the 2008 crisis, I gotta wonder how come Fannie Mae [NYSE: FNM] and Freddie Mac [NYSE: FRE] aren't getting the same treatment as Goldman Sachs from this Congress.

On a not completely unrelated story, the GOP blocked a vote to allow debate on Chris Dodd's Financial 'reform' legislation earlier today. If you remember less than 2 years ago, it was revealed that Sen. Dodd (D-CT and Chairman of the Senate Banking Committee) had recieved preferntial treatment on mortgages from Countrywide Bank. Earlier this year, Dodd announced that he wouldn't seek re-election and some view his 'reform' bill as Dodd's swan song.
Sweeping nationalization of a sector of the economy cloyingly referred to by this President and Congress as 'reform'. Hmm....sounds familiar.
Posted by Fenway_Nation at 9:59 PM