Extra Helping of Sports Chowdah- Anybody Else Feel a Draft? Great Satan Burns Former Team in 2OT; Rangers Coralled in 12 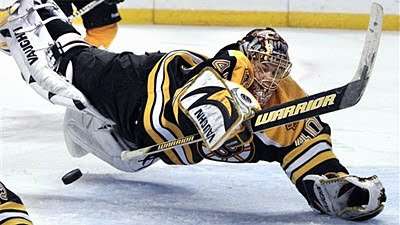 NHL: The Bruins rallied from a 2-0 deficit in the 3rd period of Wednesday's Game 4 matchup against the Buffalo Sabres to tie the contest at 2-2. David Krejci scored Boston's first power play goal since Game 1 to make it a one-goal game just over two minutes into the 3rd. Bergeron would follow suit with a tally to even things at two goals a piece and Tukka Rask kept the Sabres off the board in the 3rd by making several dramatic saves like this:


Of course, Ryan Miller returned the favor in overtime, getting his mitts on a big juicy rebound that everybody from shooter Miroslav Satan to the scoreboard operator thought was destined for the back of the net.


However, you can't keep a good Satan down....even if it takes an extra overtime. Called for too many men on the ice at the 5:50 mark of the 2nd OT, the Bruins would go on their 7th power play of the night.


The Bruins take a 3-1 series lead with the chance to finish off the Sabres tonight at HSBC Arena in Buffalo. Tukka Rask stopped 35 of 37 shots faced while Miller stopped 36 of 39 shots faced throughout regulation and overtime. This is one of those rare instances where we're treated to an outstanding performance in net at both ends of the ice without having to use it as an excuse for why the Bruins lost a meaningful game. The save percentages and other abstract statistics don't do justice for either Rask or Miller's performance, which is why I felt the need to embed the videos above.

MLB: While the Bruins were going the distance (and then some) against the Sabres at the Garden, a few stops down on the orange line (before transferring to the green line) at Fenway, the Red Sox needed all of 12 innings to get past the Texas Rangers. Josh Beckett continued to struggle, going seven innings and giving up 7 runs on seven hits and five walks. There was a JD Drew sighting, as he belted a grand slam in the bottom of the 3rd. Darnell McDonald and Mike Lowell also homered for Boston in the game while Daniel Bard and Papelbon came on for two innings of relief each and only giving up one hit. Hideki Okajima had a 1-2-3 top of the 12th inning while the Ranger's Dustin Nippert would give up a 1-out single to Marco Scutaro. Scutaro would then tag up and just beat the throw into 2nd on JD Drew's fly ball to center and the decision was made to intentionally walk Dustin Pedroia to get bring up Kevin Youkilis, who doubled to dep center field to give the Red Sox the 8-7 win on Wednesday.

However, Boston's modest 2 game win streak would come to an end last night when the Rangers CJ Wilson would shut out Boston in 6 and 2/3rds innings of work for the 3-0 win. Clay Buchholz would strike out 10 and give up 6 hits and 3 runs in his outing- also 6 and 2/3rds innings.

Presently, the Red Sox record is at 6-10, 'good' for 4th place in the AL East. The Sox will play host to the Baltimore Orioles with Jeremy Guthrie getting the start against Jon Lester.

Other Red Sox News: The timetable for Jacoby Ellsbury's return has been put in question after doctors discovered hairline fractures in four of his ribs. Dr. Thomas Gil said that his return would be dependent on the symptoms, saying that as long as he felt he could comfortable run, swing and field effectively, then he can return.

NBA: Its been awhile hasn't it? Just a reminder that game 3 of the Celtics series against Miami takes place tonight. Boston currently holds a 2-0 lead in the series after their fairly brutal 29 point beatdown of Miami on Tuesday night.
Posted by Fenway_Nation at 11:26 AM