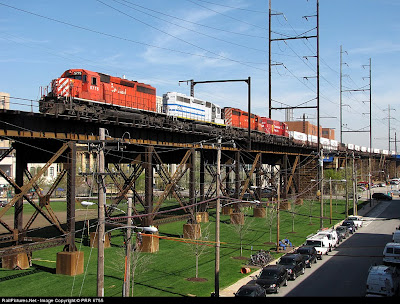 The home opener for the 2010 Phillies season was right around the corner when railpictures.net contributor PRR 6755 caught a quartet of veteran EMD locomotives tiptoeing their way across west Philly with an intermodal train.

The red EMD locomotives are not following Roy Halliday down from Canada, however. This is Canadian Pacific train 164, with red and white SD40-2 #5775 on the point, a grey rent-a-wreck SD40-2 from Citi financial, another red and white CP SD40-2 and a GP38-2 sporting the newer 'golden rodent' logo bringing up the rear. Train 164 is seen in the final stretch of its journey from Montreal to Philadelphia.

Visitors from the great white North aren't so unusual in the City of Brotherly Love. Canadian Pacific inherited trackage rights into Philadelphia with their 1991 acquisition of the Delaware & Hudson over what was then Conrail. In 1996, Conrail spun off their Allentown-Scranton, PA line and sold it to the Reading & Northern. Between Allentown and Philadelphia, Canadian Pacific utilizes CSX trackage rights, which includes their high-flying former Pennsylvania Railroad Trenton Line.

Norfolk Southern and Canadian Pacific have a reciprocating agreement- CP trains are allowed to operate over NS between Detroit and Chicago to access CP subsidiary Soo Line as well as the D&H trackage rights into Philadelphia and Harrisburg via Binghampton, NY while Norfolk Southern trains are allowed to operate over CP's former D&H line between Binghampton and Mechanicsville, NY to interchange with Pan Am Railroad (formerly Boston & Maine) giving NS access to New England.