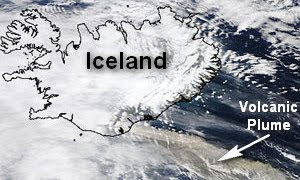 An extensive plume of fine ash from Iceland's Eyjafjallajokull volcano has drifted across much of Europe and the UK , shutting down air travel in the process. Civil Aviation authorities from across Europe are concerned that an accumulation of ash in the engines of aircraft would cause them to shut down mid-flight. 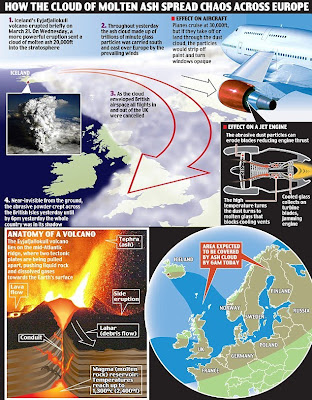 The shutdown already represents the biggest disruption of civilian air travel in that part of the world since WWII and has left thousands of travelers stranded across Europe this week. The shutdown is costing airlines millions of dollars per day, and still isn't known exactly when airspace is expected to reopen. The spreading cloud has prevented heads of state from attending the funeral of Polish President Lech Kaczynski, who was killed with 93 others in what was presumably a non-volcanic ash related plane crash. People with respiratory conditions have also been warned to stay indoors as much as possible.

Already the Global Warming alarmists and shysters have tried holding this Icelandic eruption up as an example of the dire looming threat that global warming (caused by you and me- not them, tho') plays in melting glaciers in Iceland, thus causing more volcanoes there to blow their top

Apparently up until recently, Eyjafjallajokull was encased in a glacier. Look- I'm no geologist....hell....I didn't even stay at a Holiday Inn Express last night, but wouldn't....oh....I dunno....something like molten magma or superheated gases and ash play as much a role in the accelerated melting of a glacier with a freakin' active volcano on top of it as say any given coal-fired power plant?

Also, I'm dying to know which 'carbon footprint' is bigger.....commercial air travel in Europe any given year or Eyjafjallajokull blowing its top and spewing ash for thousands of miles.
[cross posted at Dopenhaagen]
Posted by Fenway_Nation at 4:37 PM