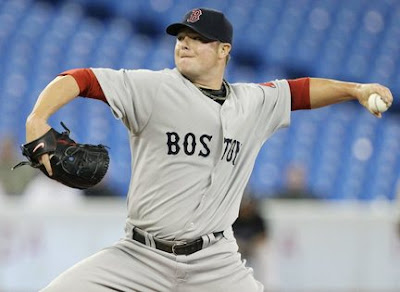 MLB: After giving up 12 runs in the series opener at Toronto on Monday night, the Red Sox pitching staff would go on to allow exactly one run against the Blue Jays lineup in the next two games.
On Tuesday night, Clay Buchholz went 8 innings while giving up seven hits, one run striking out four and walking two on 117 pitches. With Papelbon having the night off, Ramon Ramirez had a 1-2-3 bottom of the 9th to close out the game for his first save. Although Toronto would get on the board first with a Vernon Wells RBI double in the bottom of the first, the Red Sox would get the equalizer on a Jeremy Hermida single that plated Big Papi from 2nd base. The Sox would get the go-ahead run on a bases-loaded walk to Mike Lowell to make it a 2-1 game.

And as good as Buchholz was on Tuesday, Lester followed up with an even more impressive outing the following night, giving up just one hit and striking out 11 in seven innings of work. Darnell McDonald scored on a Pedroia sac-fly in the 6th and drove in Adrian Bletre on a single in the 7th to put Boston up 2-0. The only hit Lester allowed was a leadoff double to Vernon Wells in the bottom of the 2nd inning. Daniel Bard would keep it a scoreless game despite giving up a leadoff double to Alex Gonzalez, and Papelbon would come on to close out the game for his 7th save of the season.

The win gives Boston it's first sweep of the season and puts them at 11-11. The Red Sox had tonight off, but will travel to Camden Yards for a weekend series against Baltimore. David Hernandez is slated to start for the O's while John Lackey will get the start for the Sox.

Other Red Sox News: Dice-K's back! Boston will reportedly have him start on Saturday against Baltimore while moving Tim Wakefield to the bullpen to accomodate Matsuzaka in the starting rotation. Matsuzaka had thrown a 69-pitch simulated game earlier in the week.

Red Sox executive Jeremy Kapstein has submitted paperwork to run for Leuitenant Governor of Rhode Island earlier today. Kapstein will be running as a Democrat and face a primary challenge from current Lt. Gov Elizabeth Roberts. Kapstein was a former agent and is currently the senior advisor for Baseball Projects in the Red Sox organization.

MLB Broadcaster Poll Results: My oh my! Looks like we had some visitors from the Northwest, as the Mariner's Dave Niehaus had a pretty strong showing in my MLB Broadcaster poll. However, L.A's Vin Scully edged out Niehaus, getting 29% of the votes. Niehaus finished second with 21% of the votes and Boston's Joe Castiglione placed 3rd with 11% of the vote tally. Hall of Fame broadcasters like Milo Hamilton, Bob Uecker and Jon Hamilton recieved around 5% of the total votes.

Speaking of Hall of Fame baseball broadcasters, the month of April marks a couple of milestones- some somber, like the one year anniversary of the passing of Phillies broadcaster (and NFL Films narrarator) Harry Kalas.


And I know I'm several weeks late on this, but this month also marks the 36th anniversary of Hank Aaron eclipsing Babe Ruth's home run record. It was a home game for the Braves as they hosted the LA Dodgers on April 8th, 1974 and the game was being televised nationally on NBC. Milo Hamilton was the Braves announcer at the time, while the legendary Curt Gowdy was calling the game for NBC and Vin Scully had been calling the games for the Dodgers since they were in Brooklyn. I hope you enjoy the audio from this clip I came across on YouTube.
Other MLB News: It was announced earlier this week that Milwaukee Brewers broadcaster Bob Uecker will undergo heart surgery on Friday. Uecker's cardiologist said that Uecker had a heart murmur that was likely brought about by a small leak in the aortic valve. The 2003 Ford C Frick winner is expected to miss anywhere from 10-12 weeks while recovering from the procedure. We here at Not Another New England Sports Blog wish Mr. Uecker a speedy recovery and look forward to hearing his voice calling Milwaukee games again. 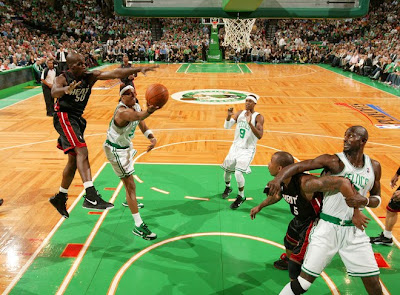 NBA: The Celtics finished off their 1st round series against Miami with a 96-86 win over the Miami Heat at the Garden Tuesday night. Leading by as much as 21 points during the game, Miami cut into the C's lead to make it a 3-point game with about 10 minutes left in regulation before Boston was able to pull away once again. Miami's Dwayne Wade was good for 31 points while Ray Allen had 24 for Boston. Rajon Rondo was good for 16 points and 8 rebounds while Paul Pierce had 21 points and 7 rebounds.

With the Cleveland Cavaliers win to finish off the Bulls for their 1st round series on Tuesday night, this sets up a Cavs-Celtics matchup for second round of the NBA playoffs [Would I come across as too dismissive of the Magic or Hawks if I called the Boston/Cleveland matchup 'The REAL Eastern Conference Finals'?- NANESB!]. Game one of the series is set for Saturday night at Cleveland.

NHL: OK....file this under 'H' for 'Holy Crap! I DID NOT See That Coming!'. Earlier, when I mentioned that the Bruins would wind up playing the Flyers if the #8 seeded Montreal Canadiens beat the President's Trophy-winning Washington Capitals, I meant that you should expect Boston to play the Penguins instead.

Well, after trailing 3-1 in the series to Washington, Montreal came back to force a Game 7 which took place last night. Montreal led 2-0 for much of the game, keeping the Caps off the board until the final 2 minutes of regulation when Washington's Brooks Laich finally figured out how to get one past the Habs Jaroslav Halak. While Halak lost the shutout bid, he did make 41 saves to hold on for the 2-1 win and the improbable series win over the heavily favored Caps. This means that the bottom three seeds in the Eastern conference (#6 Boston, #7 Philadelphia and #8 Montreal) all advance to the next round.

Boston will take on Philly for game 1 Saturday afternoon while Montreal's rally earns them a matchup with the defending Stanley Cup champion Pittsburgh Penguins.

Other NHL News: The Buffalo Sabres have picked up the 1-year option on coach Lindy Ruff's contract, keeping him with the Sabres for the 13th straight season.
Posted by Fenway_Nation at 11:09 PM