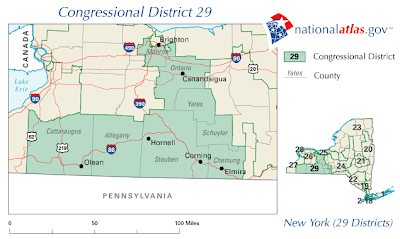 Since Representative Eric Tickle-Me-Massa's abrupt resignation in early March, New York's 29th Congressional District has apparently been languishing without a representative, with no special election to fill the vacant seat on the horizon.

This story doesn't seem to be getting much play outside of Albany or the district itself. In some states, a suddenly vacant US House or Senate seat can be appointed by a governor, such as when Massachusetts Gov. Deval Patrick appointed Paul Kirk when Ted Kennedy passed away last summer. In other states, the governor is required to schedule a date for a special election to fill the vacated seat. We're presently seeing an example of this in Pennsylvania, where Gov. Rendell called for an election set to take place in May to fill the seat in Pennsylvania's 12th district left vacant by the death of John Murtha.

New York is one of those states that requires a special election to fill a vacant seat, with the election date determined by the governor such as last year's race in New York's 23rd Congressional district. However, it appears that the unelected Governor- David Patterson- is dragging his feet on setting up an election date for the 29th district.

“We have some serious concerns about the financial impact that a special election could have on the county level, especially because those counties are facing the same fiscal crisis that the state is facing,” said Maggie McKeon, a spokeswoman for the governor. “Furthermore, the Governor has no interest in disenfranchising military voters who are overseas, and who may not be given adequate time to vote given the short time frame of a special election calendar. This is some of what is being considered, but no final decision has been made yet.”

Ah yes.....those pesky concerns over the financial impact; Because nothing says 'deficit hawk' like a Northeastern Democrat.

While it's true that New York state certainly has its share of financial woes, one has to wonder if something else is behind the prolonged delay in setting up an election for NY-29.

Republican and former mayor of Corning, NY Tom Reed is currently a candidate without an election. Reed and others see a possible political motivation in Gov. Patterson's delay, possibly buying time for the Democrats to field a viable candidate from the district or have the election held when reports of Massa's actions aren't as prominently in the news cycle [although I don't think memories are that short in NY-29- NANESB!].

"I would assume it’s for political purposes. I don’t understand it. The governor has already said he would call it as soon as possible,” Reed said of the delay. “Whatever the election results are, we’ve just got to get it done.”

Going back to last year, it took Gov. Patterson all of eight calendar days to call for a special election in NY-23 when the Representative John McHugh vacated his post after being nominated Secretary of the Army. It's been nearly a month since Gov. Patterson's office even made a public statement regarding NY-29.

In theory, NY 29 could go without representation in Washington DC between now and November. Think of all the issues that could come down the pike between now and November....hell, nobody was there to represent NY-29 when the House put 0bamacare to a vote last month. And we're supposed to believe the reason why is because the Democratic 'leadership' in the state has abruptly discovered fiscal responsibility?

I think the folks along the Southern Tier deserve better than Patterson's excuses.
Posted by Fenway_Nation at 10:53 PM