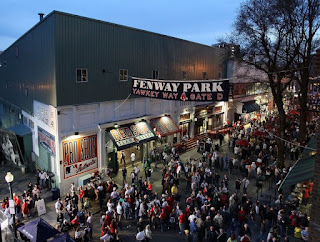 After much buzz and anticipation, the Red Sox and Yankees opened up the 2010 MLB season with a night game at Fenway on Easter. Pero Martinez was on hand to throw out the ceremonial first pitch to the home crowd's delight, and for awhile it appeared as though the Sox could use him back in uniform.

Opening night's pitching matchup put Red Sox ace Josh Beckett against the Yankee's CC Sabathia. Neither pitcher allowed a baserunner in the respective 1st inning of work. However, the Yankees would take a 2-0 lead on solo home runs by Jorge Posada and offseason acquisition Curtis Granderson in the 2nd inning. The Sox managed to cut that lead in half when Kevin Youkilis doubled, Big Papi grounded out to 1st (moving Youk to 3rd) and Adrian Beltre got his first RBI as a member of the Red Sox on a sac-fly to deep center field.

However, New York managed to pad that lead when Beckett gave up a pair of RBI singles in the 4th to Brett Gardner and Derek Jeter. Then, Brett Gardner sprinted home from 3rd on a double steal as Victor Martinez didn't bother checking the runner at third while trying to throw Jeter out while running from 1st to 2nd. That made it 5-1 Yankees and the home crowd restless. It was looking like one of those deals where one would try and reassure anybody who's willing to listen by with the boilerplate 'It's OK- it's only one game......can't win 'em all' to try and take some of the sting out of getting spanked by one's detested arch-rivals live on National TV. 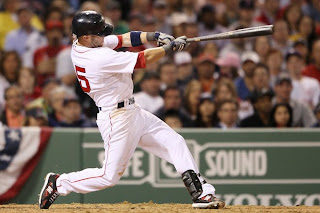 Beckett only lasted 4 & 2/3rds innings before he was pulled, giving way to Scott Schoenweis who was signed barely a week ago. However, things weren't going to be much easier for Sabathia. The Red Sox were able to chip away at the Yankee's lead in the bottom of the 5th when Marco Scuatro's single drove in JD Drew with two away.

Sabathia continued showing signs of wearing down and in the bottom of the 6th, he walked Dustin Peroia had Victor Martinez to double off of him before Youkilis tripled, driving in the two baserunners before being relieved by David Robertson.

The Yankees would re-take the lead when Ramon Ramierez would give up two hits and a walk, only logging one out in his appearence. Hideki Okajima would come on and the two inherited runners would score- Mark Teixera on a Robinson Cano groundout to first and A-Rod on a Posada single- to put New York back up 7-5.

But bound and determined to make anybody who shut off the game when the score was still 5-1 Yankees kick themselves the following day, Chan Ho Park came on in relief of Robertson to start off the bottom frame of the 7th. Marco Scutaro got things started with a single, and after Ellsbry struck out, Dustin Pedroia planted one in the bottom rows of the Monster seats to tie the game at 7-7. Youkilis would double to center field off of Park before Park was yanked for Damaso marte. Youk would advance to 3rd on a wild pitch and then score on a passed ball to put the Red Sox up 8-7. 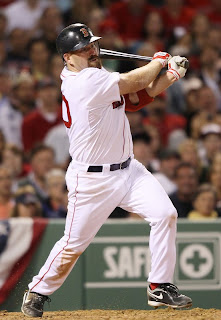 Daniel Bard had a relatively smooth outing in relief for the Sox, getting the first two batters he faced out in the top of the 8th before walking Nick Johnson. Randy Winn came on to pinch run for Johnson, but was out at second when Teixera grounded into a fielder's choice to end the top half of the 8th.

The Red Sox would go on to add an insurance run off of pinstriped headhunter ChokeJoba Chamberlain when Mike Cameron had a 1-out single and went home on Pedroia's single to make it 9-7 in the bottom of the 8th.

Fresh from ESPN reminding us how Jonathan Papelbon closed out the 2009 playoffs, Papelbon came on in the top of the 9th to close out the first game of 2010 for Boston. The Red Sox closer got A-Rod to ground out to 3rd pretty quickly, then had Robinson Cano fly out to center before giving up a single to Posada. Before anybody could say 'Ruh roh!' he got Curtis Granderson to ground out to 3rd.

It wasn't pretty for much of the time, but it was good for a 9-7 win and first place in the AL East. Okajima is credited with the win, Park gets hung with the loss and Paps is a perfect 1:1 in save opportunities. Interesting stat I caught after the game- offseason free-agent pickups Mike Cameron, Adrian Beltre and Marco Scutaro were a combined 5 for 9 with 3 RBIs Sunday night. These are 3 guys Epstein said the Sox were signing for their defense, so I guess anything else is a nice little bonus then.
Even if we went with the NHL's 'Three stars' deal, it would be hard to narrow down tonight's stars to just three. Dustin Pedroia was 2-4 with 3 RBI, two runs, a home run, a walk and a strikeout. Kevin Youkilis was 3-4 with three runs, three hits and two RBI. I was pleasantly surprised by Schoenweiss' outing as well, although Adrian Beltre would probably get the (hypothetical) 3rd star for his 2-RBI evening.
Pretty good debut for Beltre, Scutaro and Cameron tonight. Both teams won't play again until Tuesday night with AJ Burnett starting for the pinstripes and Jon Lester taking to the bump for the BoSox.
Other Red Sox News: The Red Sox placed pitcher Boof Bonser on the 15-day DL with a right groin strain retroactive to March 26th. Bonser may be optioned to AAA Pawtucket once he comes off the DL.
Daisuke Matsuzaka was also placed on the DL with a neck strain in order to make room for Scott Schoenweis on the opening day roster. RHP Junichi Tazawa is expected to have season-ending ligament surgery on his elbow next week as well. 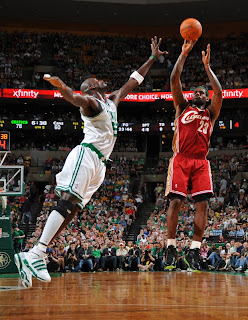 NBA: Wow....could somebody please explain this to me? The C's basically couldn't buy a win against the Rockets or Oklahoma City all last week, yet somehow blow a 22-point lead against the best team in the NBA and still manage to hang on for the win? I'm still trying to figure that one out.

Sounds like quite the roller-coaster I missed while I was out doing family-type stuff for Easter. LeBron was pretty busy at the Garden this Easter, scoring 42 points and with 7 rebounds on the day. None of the Cavs other starters even broke past the 20-point mark today, and James was 0-9 from 3 point range. Cleveland scored 23 of the first 28 points in the 4th quarter, which resulted in them taking their first lead of the game at 104-103 with just under 3 minutes remaining in regulation. However, James missed some pivotal free-throws in the final minute of regulation and decided to try for the three point attempt instead of passing to an open Antwan Jamison to tie the game at 2 with time expiring. The Celtics wound up escaping with the 117-113 win at the Garden.

Ray Allen had a good day for Boston- his best as a Celtic, as a matter of fact- with 33 points, 3 rebounds and hitting 6 out of 9 attempted 3 pointers and going 7 for 7 from the free throw line. Kevin Garnett, when he wasn't exchanging words with LeBron, had 19 points on the day, 8 rebounds and was 9 of 10 from the free throw line. Kendrick Perkins had 10 points and as many rebounds for the afternoon.

The Celtics will take on the Knicks at Madison Square Garden tomorrow night.

NFL:Philadelphia Eagles QB Donovan McNabb was traded to the Washington Redskins ESPN announced Sunday night. The Redskins are reportedly giving up a 2nd round pick in this years draft and a third or fourth round pick in the 2011 draft for McNabb's services.