Polish President, Crash Victims To be Laid To Rest Sunday As many as 100,000 mourners packed into Warsaw's Pilsudski Square on Saturday to honor President and First Lady Kaczynski and the other 92 victims of last week's devastating plane crash in Russia. The services included a Catholic Requiem Mass and a military 3-gun salute with the names of the victims being read out one by one by actors. Kaczynski's twin brother Jaroslaw, a former prime minister and current leader of the opposition party was in attendance along with the late President's 29 year old daughter and two grandchildren. A presidential aide said that an estimated 180,000 people had lined past the coffins of the deceased to pay their respects since they went on public display in front of the Presidential Palace on Tuesday. Over the past week, the space in front of the palace has been a makeshift shrine to the dead, adorned with thousands of flowers, candles, crucifixes and red and white Polish flags.

President Kaczynski and the First Lady were en route to a memorial last week when their plane crashed in the Katyn Forest on the 70th anniversary of the Soviet NKVD (predecessor to the KGB) massacring an estimated 22,000 Polish Army Officers and Prisoners of War. Syrah has a good writeup on the dark significance Katyn holds for Poland both then and now. 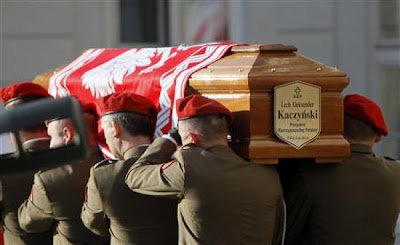 President Kaczynski and his wife are scheduled to be laid to rest at the crypt of the Wawel Cathedral in the southern city of Krakow on Sunday. President Obama along with German Chancellor Angela Merkel, Canada's Prime Minister Stephen Harper and Spain's King Juan Carlos announced that they could not attend the funeral services due to a lingering cloud of ash from a volcanic eruption in Iceland that spread across much of Europe and made air travel all but impossible over the last few days.
Posted by Fenway_Nation at 2:37 PM