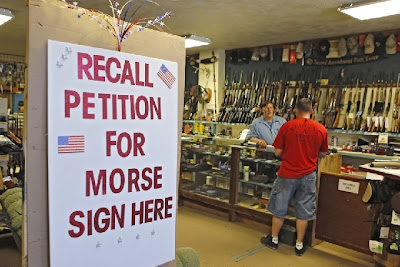 Two Colorado state lawmakers, including the President of the state Senate, were recalled from office in a first-of-its kind special election last week.

State Senator Angela Giron of Pueblo and state senate president John Morse of Colorado Springs had supported Colorado's sweeping gun control laws which had passed in a legislative session earlier this year, angering many Coloradans and forcing some businesses to move out of state. By Morse's own admission, he ignored his own constituents opposed to the gun control laws claiming he was receiving hate mail and threatening correspondence from them. Vice President Joe Biden and New York mayor Michael Bloomberg also reportedly lobbied Colorado state lawmakers to pass a landmark bill in the wake of the 2012 Aurora movie theater killings.

The bill, which banned magazines with a capacity of 15 rounds or more and required a background check for any transfer of firearms between private parties, was heralded as a relatively rare triumph for gun control advocates outside the liberal bubbles of California or the northeast corridor. Critics said the bill would do nothing to reduce crime while most Colorado sheriffs said the law as it was written would be unenforceable.

While the results of the election do nothing to shift the balance of power in the Colorado state legislature, its worth pointing out that both Morse and Giron hailed from majority-Democrat districts that went for Obama during the 2012 campaign.

Gun control advocates have been downplaying the results of the Colorado recall since Morse and Giron conceded, claiming there was no backlash over their gun control votes or that there was widespread voter suppression dampening turnout. Despite Morse openly seeking help from Boston and San Francisco, gun control supporters complained of the National Rifle Association's involvement even though observers say outside groups like Bloomberg's Mayors Against Illegal Guns or the DNC outspent the NRA by a nearly 5 to 1 margin.