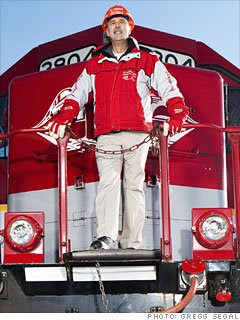 RJ "Rick" Corman, the savvy Kentucky entrepreneur who parlayed a small outfit with a single backhoe and rented dump truck into a $300 million business, passed away from multiple myeloma on August 23rd.

Corman claimed that he got his start fairly early, helping out with his grandfather's business hauling junk, cattle and dirt in Jessamine County, Kentucky at age 11. Barely graduating high school in 1973, Corman soon went into business for himself by renting a backhoe and dump truck to find whatever odd jobs he could and easing into railroad work by rebuilding crossings.

"Railroads don't care -- well, they really can't care -- what the weather's like when something needs fixing," he says. Workers who couldn't take the punishment left. Corman kept making himself the model for doing things right. A "go-getter" by the description of many, including even himself, he steadily picked up construction jobs and gained a reputation for fast, expert service. It also helped that most people simply liked him, sensing his innate intelligence, quickly learning that he was totally honest, enjoying his openness and humor and boisterous, cackling laugh.

In business, Corman was opportunistic. A Columbus company to which the rail industry outsourced some of its derailment business quit the city, and Corman was asked by railroad friends to step into the void. He did, accepting the need to acquire heavy, expensive equipment -- machines that will lift a derailed car, for example, so that the rails beneath it can be repaired or replaced. But Corman also has a hand in more prosaic businesses, such as selling rails and ties to railroads. In effect, he takes on inventory costs they'd just as soon not bear.

By 1984, when Corman was paying 24% interest to finance new trucks, he sought help from Luther Deaton, a lending officer at Lexington's Central Bank & Trust. Deaton, now president of the bank, recalls that "a very self-confident and happy-go-lucky" Corman, then just short of 30, arrived for their first meeting wearing boots, khaki pants, and a big belt buckle flashing his initials, and with no financial statements in hand. "I just couldn't get comfortable with him," Deaton remembers.

Deaton stayed skeptical until Corman got him to visit a couple of work sites -- "to see what we do." On his first visit, to a sprawling Baltimore & Ohio wreck, Deaton saw shiny red trucks and bulldozers and watched Rick work atop a railroad car, rigging cables to start pulling derailed cars out of a tunnel. Next, on a deathly hot August day, Deaton drove to see a stretch of railroad being rebuilt. Deaton found Rick pulling up spikes so that track could be re-laid, while sweat poured out of the top of his work boots. Explaining to Deaton that he couldn't right then talk to him, Corman said that if he got the job finished by midnight, he would get a bonus and in turn be able to pay bonuses to his workers -- those remaining, because several had quit during the day owing to the harsh conditions.

Deaton went home, comfortable, and says he told the president of the bank, "Look, we've got to help this guy. He knows how to get it done. He's free to go be a great success," and the boss said, "Do it." The next day, a Saturday, Deaton found Corman sitting in the engine he used for an office, with blisters on his feet visibly oozing. Deaton cut his interest costs on the trucks to 14% and offered him a $500,000 credit line. "We've never looked back since then," says Deaton. "He's a banker's dream." Translation, according to Deaton: Corman is a brilliant businessman who borrows frequently, but is conservative and always good for his debt.


BNSF CEO Matt Rose compared Corman to legendary oilfield firefighter Red Adair, both in terms of the scale and unforgiving schedule of the job. In 1987, Corman ventured into the railway operating business when his contacts with the Seaboard System [now CSX- NANESB!] sold him a 20 mile former Louisville & Nashville branch line to Bardstown, KY for $300,000. Within a year of the sale, Corman began operating My Old Kentucky Dinner Train on the Bardstown line, which is still running to this day.

In 1995, Corman embarked on an ambitious expansion with the acquisition of nearly 300 miles of Conrail's former Pennsylvania Railroad Clearfield cluster serving the central Pennsylvania coalfields. RJ Corman lines also acquired branchlines around Allentown, PA and Lima, OH in the 1990s while much closer to home, Corman's group purchased the 115 mile former Louisville & Nashville Old Road line between Louisville and Winchester, KY (via Lexington and the state capitol of Frankfort) in 2003 which they called the Central Kentucky Lines to differentiate it from the Bardstown operation.

With an already robust traffic base on the Central Kentucky Lines, Corman aggressively went after new business on the former Old Road through his backyard. As a result of his company's efforts, the Central Kentucky Lines now see near-daily unit trains of sand and aluminum ingots in addition to the paper, alcohol, limestone, peanut, brick and corn syrup that was there prior to the RJ Corman Line's acquisition.

Perhaps the biggest moment for Corman came in 2005 when his company was contracted to rebuild CSX's line out of New Orleans and the company's devastated Gentilly yard- a key hub that linked CSX with no fewer than five other Class 1 carriers- immediately after Hurricane Katrina.

That same year, RJ Corman Lines acquired a 16 mile former CSX branch between Thurmond and Pax, WV. Within a few years, the line would rebuild an abandoned connection with the Norfolk Southern on the west end and garner 2007 Shortline of the Year honors from Railway Age magazine.

Corman was also a rail enthusiast at heart, and this was made apparent in 2008 when he purchased a fully operational standard gauge 2-10-2 'QJ' steam locomotive from China for operation on his Central Kentucky Lines. Like his much larger counterparts at CSX and Norfolk Southern, RJ Corman also regularly operated special VIP trains to the Kentucky Derby each year.

By 2009, Corman had acquired the assets of bankrupt Canadian Genset manufacturer Rail Power, Inc and began demonstrating some of the units on his own Central Kentucky lines. After the Rail Power acquisition, the company was renamed RJ Corman Rail Power and filled orders for CSX, California shortline Modesto & Empire Traction and the ports of Montreal and Corpus Christi, TX.

The company also boasts its own police department and fleet of aircraft used to either fly employees in to perform contract work at various sites or visually inspect the lines from above. Like the Corman fleet of locomotives, the two private jets and helicopter are painted red with silver trim.

Corman was aware of his deteriorating health since 2001 and made estate planning a priority while undergoing treatment. He is survived by his partner Tammie Taylor and five children. In lieu of flowers, Corman's family has requested that donations be made to the Dana-Farber cancer institute instead. Hall of Fame Kentucky men's basketball coach John Calipari expressed his condolences and announced that he would be wearing red in honor of Corman this upcoming season [usually a no-no, since Corman's company colors are the same of Kentucky's in-state archrival Louisville- NANESB!]. US Senator Mitch McConnell and Kentucky governor Steve Beshear also expressed their condolences.
Posted by Fenway_Nation at 2:42 PM