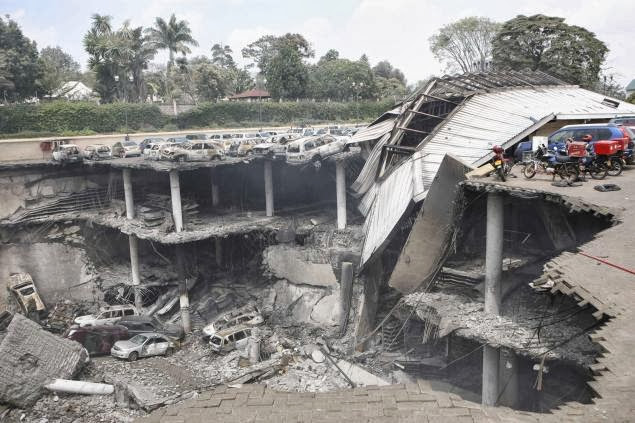 The death toll in last week's terrorist attack at an upscale shopping mall in the Kenyan capital of Nairobi has reached 67 with aid agencies saying that at least 39 people were still unaccounted for after a withering firefight and series of bomb blasts as Kenyan security forces re-took the building floor by floor.

A twitter account purportedly belonging to the Somali-based Al Shabaab islamist group claimed responsibility for the massacre and threatened further attacks in Kenya, although the ownership of a second, English language account couldn't be independently verified. Twitter reportedly suspended the first Al Shabaab account within hours of the mall attack. 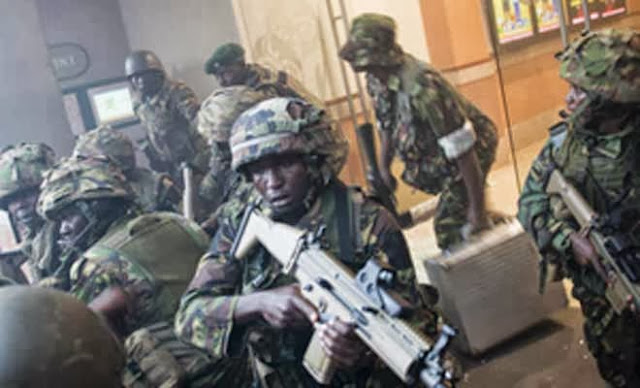 Kenyan soldiers and medical officials said that some of the victim's bodies they found had shown signs of torture and mutilation in addition to those who were shot while trying to flee.

Investigators believe that the assailants or their associates rented a shop in the Westgate mall in the months leading up to the terrorist attack, smuggling in weapons and explosives unnoticed. Kenya's intelligence service reportedly warned lawmakers that Al Shabaab was casing a number of potential targets within the country- including the mall- about a year or so before the attack as part of a routine situational report to that government's legislators.

Reports of some of the terrorists being identified as Americans or at least from the Somali community in and around Minneapolis and St Paul, MN have also reportedly caught the attention of the Minneapolis branch of the FBI, although that has yet to be confirmed. A Somali activist in Minnesota said that his warnings about the Abubakar as-Siddique mosque in the Twin Cities being used as a recruiting center for Al Shabaab or other islamist groups in recent years were either ignored or downplayed by the Council on American-Islamic Relations (CAIR). Investigators from both the FBI and Scotland Yard are reportedly on scene in Nairobi to comb through forensic evidence left behind at the Westgate mall.

Meanwhile, Interpol has released a 'Red Notice' arrest bulletin for a British convert to Islam named Samantha Lewthwaite, who was a widow of one of the 7/7 London bombers and was thought to have participated in the attacks- eyewitnesses describe a pale-skinned woman taking part in the attacks early on.
Posted by Fenway_Nation at 10:18 PM