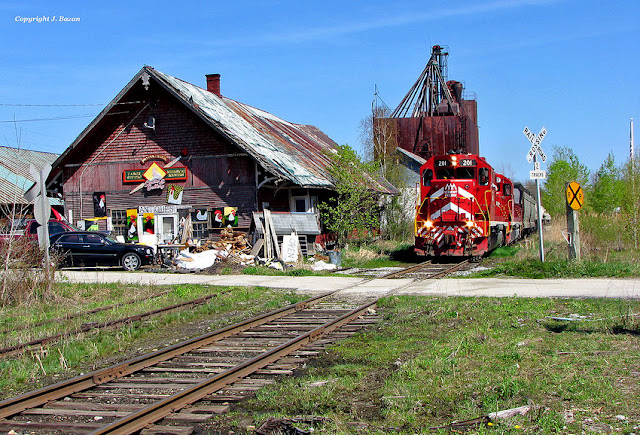 Today's train of thought takes us along the western end of the Vermont Railway system and the tiny burgh of Danby, VT.

There's that old saying 'One Man's Trash is Another Man's Treasure' which seemed to have gained new life after the 2010 debut of American Pickers on the History Channel [the premise, for those of you who have never seen it, is two guys from the Midwest in a van travel cross-country in search or rare an valuable antiques that they hope to sell at a profit at their own shop- NANESB!].

Of course, growing up in New England, I remember that in many cases the only thing that separated hoarders from antique 'dealers' was usually a sign that said "ANTIQUES" out front. The antiques shop shown above in western Vermont might've been one such instance- although the relatively new car out front seems to imply the antique shop was actually open for business and not just a motley collection of rusted junk with a sign in front of it.

The dealer has set up shop in the former Rutland Railroad Danby, VT depot located along what is now the Vermont Railway's B&R line (Bennington to Rutland). This stretch of the Rutland line used to go as far south as Chatham, NY until the 1960s when it was abandoned.

While it seems as though the guys from American Pickers would've had a field day at the old Rutland depot turned antiques shop, the building is no longer standing. It was already in poor shape when Bazan snapped this photo, plus there apparently was drainage issues as well before the depot was finally torn down in 2011.
Posted by Fenway_Nation at 10:45 PM