Quickie Sports Chowdah Update- How Sweep it Is, Red Sox Put The Broom to Struggling Yankees After Presenting Rivera With Retirement Gifts; Bills Past Due, Surging Buffalo Bests Carolina in Final Seconds 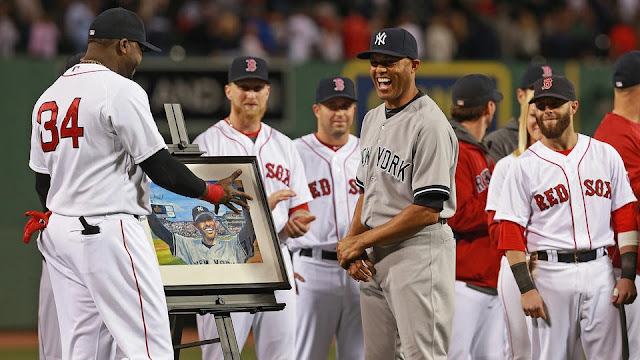 RED SOX- The final homestand of the regular 2013 got off to a fantastic start for the Red Sox with Boston taking the first two of a three game set against the Yankees who were coming in to the series in dire need of a win to secure one of the Wild Card berths.

By the time Sunday night's nationally televised game rolled around, the only suspense was what form Boston's parting gift to perennial All-Star closer Mariano would take. This was something the New York and sports media kept a running tally of the gifts the closer received throughout the season- Texas presented him with a cowboy hat and a pair of custom cowboy boots with the Yankees logo and his name on it while the Padres a customized beach-cruiser bicycle and the Minnesota Twins presented Rivera with a rocking chair made out of broken bats.

In Sunday night's pregame ceremony, the Red Sox presented Rivera with a #42 placard from the manually operated scoreboard in the Green Monster, a 1930's era wooden seat from Fenway [also #42- NANESB!] and a painting depicting a smiling Rivera waving to the crowd on Opening Day in 2005 at Fenway- when the Red Sox were given rings for their first championship in 86 years. Rivera is the last player in major league baseball to wear the number 42, which was retired in the late 1990s to honor the late Jackie Robinson. At the time, Rivera and Boston's Mo Vaughan were the only players in MLB to wear the #42 and were grandfathered in. With Vaughan's retirement in 2003, Rivera became the last player in the bigs to wear the number 42- although in recent years, every player on the field will wear the number 42 to observe Jackie Robinson day.

Once the ceremonies wrapped up, Boston got down to business, erasing an early 1-0 deficit thanks to a David Ortiz RBI single and a 2-run Mike Napoli homer off of Yankee starter Ivan Nova in the bottom of the first. The Red Sox added to their lead in the bottom of the 4th thanks to an extremely rare 2-out double steal where Jarrod Saltalamacchia stole home and Xander Bogaerts went to second. Saltalamacchia becomes the first Red Sox catcher in more than 30 years to successfully steal home. Nova got the hook from Yankees manager Joe Girardi in the bottom of the fifth after loading the bases with an intentional walk to Ortiz and then hitting Mike Carp with a pitch to make it a 5-1 game. Daniel Nava and Big Papi added to the Boston lead with RBI singles in the bottom of the 6th and Dustin Pedroia would belt a 2-RBI double to make it a 9-1 game. The Yankees would get back a run on the top of the 9th but Boston would go on to win by a 9-2 final.

Clay Buchholz was erratic but effective in his second start since coming back from the DL, walking batters but then managing to help himself out by getting a double play ball. Buchholz went six innings, walking four and striking out three for his 11th win of the season. Daniel Nava went 4-5 while and an RBI while Mike Napoli went 1-3 with a homer and 2 RBI on the night.

The Yankees were no doubt hoping to avoid the sweep with as many as five teams ahead of them for the final two AL Wild Card berths. Meanwhile, the Red Sox continue their homestand against the AL East as they host Baltimore on Tuesday night. First pitch is scheduled for 7:10 ET Scott Feldman [12-10; 3.54 ERA] going up against Ryan Dempster [8-9; 4.70 ERA]. The game will be carried on NESN as well as the MLB network in some markets.

NFL- Although the Patriots had Sunday off, there were a number of interesting games on Sunday afternoon, including some last second heroics in Orchard Park, NY. Trailing 23-17 against the Carolina Panthers and getting the ball back on their own 20 with only 1:38 to go in regulation, Bills QB EJ Manuel led a drive [that was aided in part by a 20 yard pass interference penalty on the Panthers that also negated an interception of Manuel that would've sealed the win for Carolina- NANESB!]. With 6 seconds on the clock, and the Bills on the Panthers 2 yard line, Manuel managed to find a wide open Stevie Johnson to tie the game at 23-23 with the Bills taking the first lead of the half on a Dan Carpenter PAT to make it 24-23 Buffalo, and that would be the final from Orchard Park.

The Bills win was one of a couple that were decided in the final seconds on Sunday. Nick Novak kicked the go-ahead FG for the Chargers with 7 seconds remaining in the 4th at Philadelphia in San Diego's 33-30 win over the Eagles. Chicago's Jay Cutler completed a 16 yard TD Pass to Martellus Bennett, putting the Bears up 31-30 over the Vikings with 10 seconds to go in the 4th. The Texans needed extra time to do it, but they beat the Tennessee Titans by a 30-24 final in their home opener at Reliant Stadium

Meanwhile, the Dolphins are sporting a similar 2-0 record to New England after besting the Indianapolis Colts by a 24-20 final on Sunday afternoon. The Patriots hold a slight edge over Miami since both of their wins were against division opponents.
Posted by Fenway_Nation at 11:59 PM