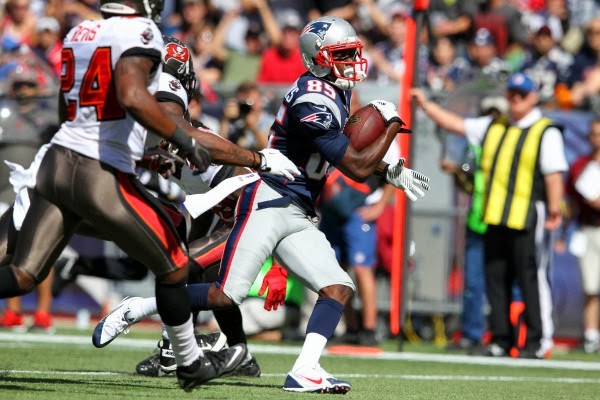 PATRIOTS- After a lackluster week two in which the Patriots and Jets seemingly duked it out to see who wanted it the least, Tom Brady and New England's young receiver corps seemed to gel in week three when the Patriots hosted the Tampa Bay Buccaneers.

The visitors got out the early 3-0 lead late in the first, but the Patriots would come back to score 23 unanswered points, including two TD passes from Brady to WR Kenbrell Thompkins in the second to give New England a 14-3 lead. The rest of New England's points came off of the foot of Stephen Gostkowski.

New England goes on to win by a 23-3 final, giving them a 3-0 record [including 2-0 against the AFC East- NANESB!]. The Patriots will continue their tilt against the NFC South with a prime time matchup against the Boston College alum Matt Ryan and the Atlanta Falcons at the Georgia Dome. Kickoff is scheduled for 8:30 ET and the game will be televised on NBC's Sunday night football. 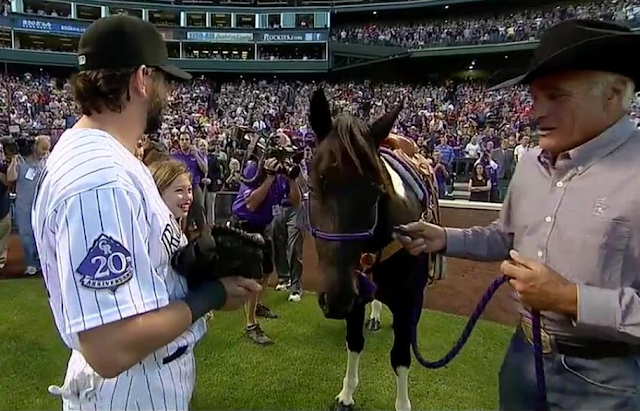 RED SOX- After a productive weekend at Fenway where the Red Sox clinched the AL East pennant and took two out of three against the Blue Jays, the Red Sox hit the road for their final road trip of the regular season starting with a two game series in Colorado. With Boston clinching the AL East over the weekend, the only real suspense would be if Boston could stay ahead of Oakland or Detroit for the best record in the American League and home field advantage for the playoffs.

The trip to Coors Field was Boston's first since 2010 and the second since completing a sweep of the Rockies in the 2007 World Series. Wednesday night's game was also noteworthy in the Mile High city as the final home game of Rockies first baseman Todd Helton. Todd Helton's two daughters and former Tennessee Volunteers teammate Peyton Manning were on hand for Helton's sendoff and he was also given a horse as a retirement gift from the Rockies.

Helton, who was the subject to trade rumors that had him landing in Boston in 2007, is currently sporting a career .317 batting average with 369 homers and 1,406 RBI's [pending the final few games of the season from Dodger Stadium for Colorado- NANESB!].

On Wednesday night, the Red Sox jumped out to an early 3-0 lead off of Rockies pitcher Jhoulis Chacin in the very first inning, with a 2-RBI double from Big Papi and an RBI single from Saltalamacchia. None other than the man of the hour, Todd Helton, got the Rockies on the board in the bottom of the second with a 1-out solo homer. Yorvit Torreabla followed that up with a 2-out RBI single to make it a 3-2 game.

The contest was knotted up at 4-4 in the bottom of the 3rd thanks to Colorado pulling even with a Helton sac-fly and a Nolan Arenado ground-rule double. However, the Red Sox would break the game open with three run homers from Victornio and Middlebrooks in the 4th and 5th innings giving Boston a 10-4 lead.

The Red Sox go on to win by a 15-5 final in their final out-of-division and interleague game of the season, splitting the brief two game series at Coors Field. From Denver, the Red Sox will travel to Baltimore- site of the infamous 2011 collapse on the final day of that season that cost then-manager Terry Francona his job- to close out the regular season with a three game series against the O's starting Friday.

ELSEWHERE IN THE AL EAST- The New York Yankees have been eliminated from postseason contention with their 8-3 loss to Tampa Bay at Yankee stadium on Wednesday night. While the Red Sox clinched the AL East title against the Blue Jays last weekend, there was still two wild card berths sought after by the Rays, Orioles and Yankees as well as Cleveland, Texas and Kansas City.

Baltimore's postseason hopes were dashed last weekend when they Rays swept Baltimore at Tropicana Field, including an 18 inning loss in the Friday Night/Saturday morning to open up the four game series.

Tampa Bay currently leads the AL Wild Card chase and closes out the season with a three game series against Toronto at the Rogers Centre this weekend. Meanwhile, the Cleveland Indians are a game ahead of the Texas Rangers for the second and final AL Wild Card berth.
Posted by Fenway_Nation at 10:53 PM